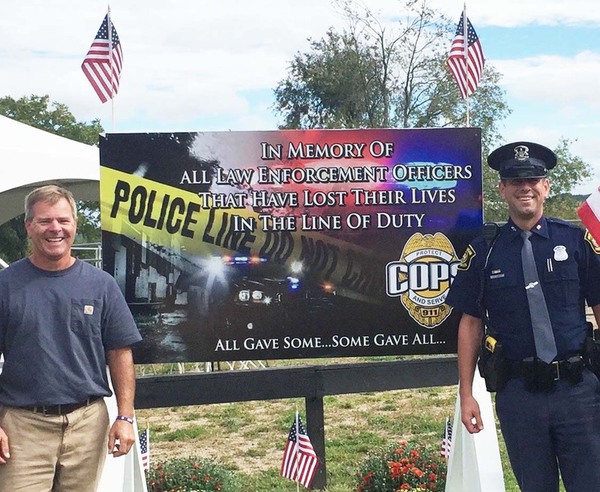 A community event in Fenton later this month aims to thank law enforcement for all they do, while helping build positive relationships between citizens and police officers.

The 2nd annual Police Appreciation Picnic will be held at Wind Walker Farms Saturday, September 23rd, beginning at 2pm. The event is free and will have live music, fireworks, a bounce house, food, games and a bonfire.

Event Organizer Herman Ferguson (pictured left) says he began the organization Concern Over Police Safety, or COPS, because he was “tired of the anti-police sentiment”. Ferguson’s objective is to increase awareness and police safety through education, and raise funds for safety training and equipment.

Ferguson feels at a young age, children should be taught that officers are in the community to protect citizens, not victimize them. In turn, Livingston County Sheriff Mike Murphy says officers can do their part by being conscious of the impact they have on the community, whether it be good or bad.

Ferguson says an encounter with a police officer when he was young built his positive perception and deep appreciation of law enforcement. Ferguson shared his personal story with WHMI, saying his father was an alcoholic and abusive, and in one particular incident was beating up Ferguson's mother badly. Ferguson, who was just seven years old, attempted to protect his mother and that's when his father turned on him. Ferguson says at that time, several police officers came through the door and wrestled his father away from his mother. One officer used his handkerchief to wipe the blood off Ferguson's face and promised they would not let his father hurt him. Ferguson says he washed the handkerchief and kept it for many years. He says that experience has stayed with him all this time and is what his mission is built on.

Sheriff Mike Murphy says Ferguson’s story brought tears to his eyes and that officers often have no idea the impact they have on others. Murphy says, “We don’t get into this profession for the accolades or the things. We do it because I truly believe it’s a calling."

Ferguson believes events like the Police Appreciation Picnic can offer positive experiences with officers like he had and change negative impressions. Donations at the event will be given to support COPS. Additional information about the event and beneficiary organization can be found at the “Concern Over Police Safety” Facebook page, a link for which is posted below. You can also hear the full interview with Ferguson and Sheriff Murphy this Sunday at 8:30am on WHMI's Viewpoint program. (DK)