No Charges To Be Filed In Fatal I-96 Pileup 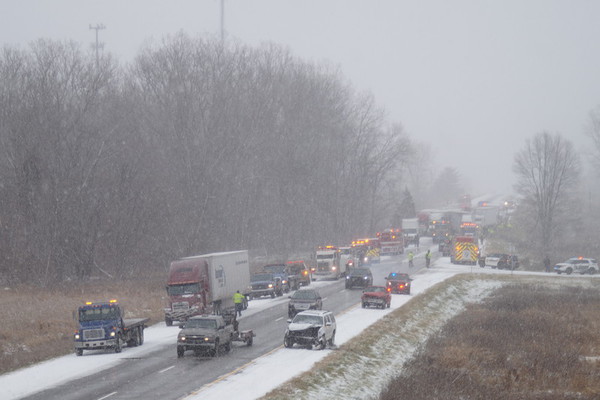 The Livingston County Prosecutor’s Office announced Monday that they will not be filing charges in the I-96 pileup in December that left three people dead.

53 vehicles were involved in the crash on snow-covered I-96 near Wallace Road in Handy Township on December 8th. A release from the Prosecutor’s Office states that according to the investigation and crash reconstruction, all drivers estimated their speeds prior to impact between 35 and 50 mph, with most drivers indicating a speed between 40 and 45 mph.

Due to the extremely poor visibility caused by the sudden winter weather conditions, drivers were traveling close enough to see the vehicle in front of them. The report indicates that by the time drivers saw brake lights, they were unable to stop in time to avoid a crash.

The investigation found that the crash began with a traffic backup on the bridge over the Red Cedar River. Due to the blocked lanes and existence of guard rails at the bridge, vehicles were unable to escape and a bottleneck was created. In addition to the weather and subsequent limited visibility, the Prosecutor’s Office says the pileup was the result of a number of contributing factors that also include the layout of the road and how well traffic was moving.

Based on the investigation, the Prosecutor’s Office has determined evidence from the circumstances is “insufficient to justify criminal charges against any of the surviving drivers for causing the deaths of the three victims.” Killed in the pileup were 69-year-old Homer and 62-year-old Theresa Tew of Ann Arbor and 28-year-old Vitalii Stelmakh, a semitrailer driver and native of Ukraine who was living in Florida.