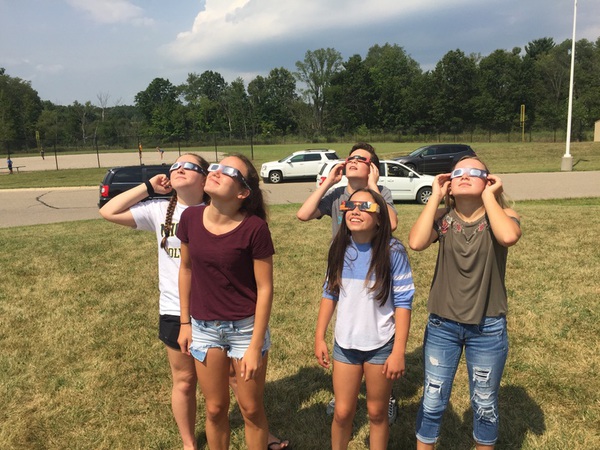 Local residents were able to see an 80% eclipse of the sun beginning around 1pm. The school’s former fifth grade students and its incoming class were invited to a viewing party on the school’s soccer field. 5th grade teacher Jason DeLand says fifth graders were the target audience because the stages of the moon are a part of the 4th and 5th grade curriculum.

The school held a similar event for the March lunar eclipse in 2015, and DeLand says at that time teachers promised students that they would meet once again for the solar eclipse. The school’s lunar eclipse party had a guest attendance of about 100 people, while today’s had double that.

Drew Thacker, Courtney Christman, Hannah Boss, 8th graders at Highlander Way Middle School, and Audrey Kane, 8th grader at Parker Middle School, are all former Hutchings students. All four came to the school at around 4am to watch the lunar eclipse two years ago and were present at this afternoon’s event. They all agreed the viewing party was fun and helped them learn, but all preferred watching the lunar eclipse because of its visibility.

Hutchings’ event had Sunchips and Eclipse gum to match the party’s theme, as well as eye protection glasses, which some people have reported were hard to get their hands on. Other viewing parties in Livingston County included an event at the Hartland Cromaine district library. (DK)