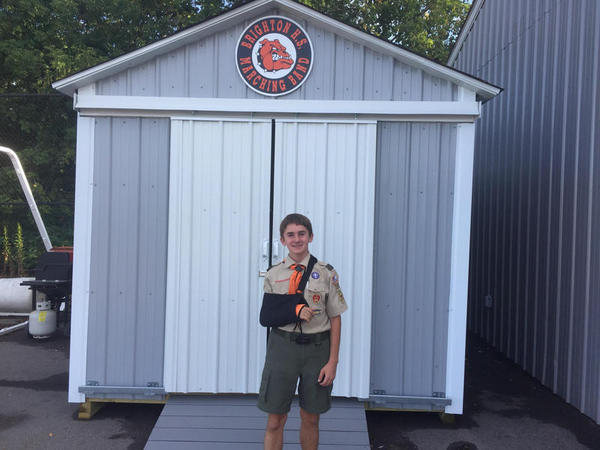 A local scout has delivered a hand-made, much needed gift to the Brighton High School marching band. Raymond York is an Eagle Scout who is entering his junior year at BHS. As a trumpet player in the marching band, York recognized a need for the band that he believed he could satisfy alongside completing his Eagle Scout project. What York came up with was a shed to help store band equipment on the football field’s grounds, which would significantly reduce, if not eliminate, the number of back and forth trips needed from the stadium and the school. York and his father delivered the finished shed as part of a ceremony at the football field Thursday evening. York spoke about the process, saying that it took around a year to complete from start to finish. It cost around $2,000 that York fundraised himself, mainly through bottle donations and donations from friends. BHS Band Director Gabrielle Hoffman said she thought this was the best idea ever and was impressed with the job York did, as he constructed it with minimal help from others. The shed is solar powered, has shelving, and Hoffman said is big enough to store the band’s new golf cart and equipment. The band’s logo is also prominently displayed over the door. Hoffman said that administration wanted it placed under the stands, but York stood tough and the shed now resides out in the open, near the scoreboard. York said that skills he has learned in scouting like leadership, time management, and people management proved to be the most useful. (MK)