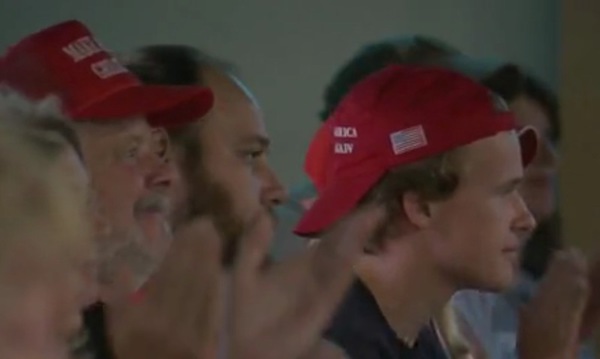 The rally was held at Block Brewing Co. and heavily attended. State Senator Joe Hune of Iosco Township describes it as a “we got your back Mr. President” rally. Hune says the event had been planned in advance, but just so happened to follow shortly after the news conference in which Trump shared his views on the violence that occurred in Charlottesville, Virginia over the weekend, saying that the groups protesting against white supremacists were "also very violent." Referring to those protesters as the "alt-left," the President said there was "blame on both sides" for the deadly violence. Those comments drew widespread criticism including from fellow Republicans, Senator John McCain and Speaker Paul Ryan.

But Hune, who is a self-proclaimed “Trump Republican”, believes the country’s leader is on the right path and says Trump would face opposition no matter what kind of stance he takes. Lena Epstein, who is supported by Hune in her bid to represent Michigan in the U.S. Senate, agrees. She says there are people who hate Trump more than they love America and will take any opportunity to criticize him. Epstein served as co-chair of the President Trump campaign.

In response to the gathering, the liberal activist group Indivisible 8 issued a statement saying, "We need a President that brings people together, not one that divides our country by pandering to the KKK and other fascist hate groups." They called on Livingston County Republicans and conservatives to denounce what they called, "Trump’s divisive comments."

WLNS reports that at the rally, Hune encouraged residents to “turn off their television” and not to look at Facebook and other "fake news." Hune tells WHMI “…you can’t talk about Trump without bashing the media, so we did some of that”. He feels ultimately, the group that gathered was “an inspiring group who just wanted to get together to show their support” for the president and country. (DK/JK)