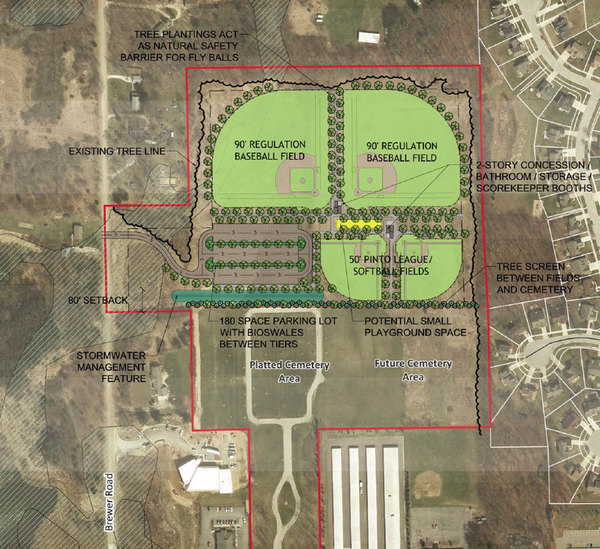 The Howell City Council has approved a conceptual design for land the City is looking to use to replace lost parkland on Lucy Road.

The City had a number of ball fields on Lucy Road as part of the former Lucy Road landfill site, but those facilities were closed down in the late 1980’s due to contamination found on site. The City previously received a $25,000 grant from the Michigan Department of Natural Resources to do some upgrades. Since the City lost that park space and open space, part of conditions established by the DNR is that it must be replaced with equally valuable property. Otherwise, the City is never eligible for future DNR grants, which Howell City Manager Shea Charles notes is a major source for park improvements throughout the state. If the proposed land swap is approved by the state, it puts the City back on an eligible list to get grants for future improvements.

Council was comfortable with the concept and approved it unanimously. The land identified for the potential swap is the northern half of the Memorial Cemetery off Brewer Road, which is currently vacant. Two 90-feet ball fields and two smaller ones as well as a parking lot are depicted on the plans. Charles stressed approval of the conceptual plans were just an interim step to demonstrate to the state that the land is functional and a viable piece of property that can be used for various recreation facilities. The proposed swap is just that, and the City would retain ownership of the property. Charles says any final design is a long way out but it would be a City-owned park.

As the conversation process moves along, future public hearings will be scheduled. (JM)