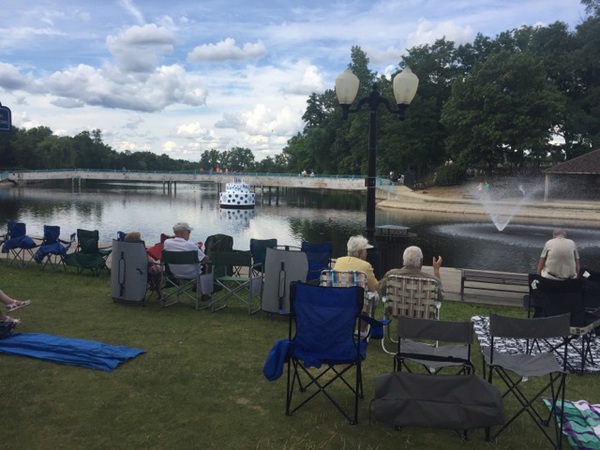 The community block party on Main Street had an old timey-feeling with its variety of historic displays, performances, and attractions. Mindy Kinsey, a member of the Brighton Area Historical Society, says the goal was to engage the community with a blast from the region’s past.

Party guests strolled down the street, taking in the attractions the celebration offered in a timeline fashion. There were older practices, like blacksmith demonstrations and vintage photo opportunities, coupled with more modern amenities, such as the entertainment performances. There were also components that included both.

The Casual Quilters Guild of Brighton hosted a quilt show at St. Paul’s Episcopal Church. On display were quilts that were recently made, as well as those made a very long time ago. Betsy Herbst, whose family settled in Brighton in 1837, brought quilts to display that were made by her grandmother and great-grandmother. She says the quilts were made in the early 1900s'.

The event also included a picnic and a tour of the Old Village Cemetery. As part of the tour, volunteers took on a character, acting as certain people that were buried in the cemetery. That included noteworthy individuals, like Kinsley Bingham, who served as Michigan’s 11th governor and is buried at the Old Village cemetery. There were also characters that represented individuals that were seemingly average, but no less important to Brighton’s history.

Tammy Sexton, a member of the Historical Society, played Alice Jolly, a single mother of two children. Sexton says her character is important because her situation was always relevant. Sexton reminds that even back then, there were women who faced challenges that come along with being a single parent. Sexton says that timeless connection and ability to relate is what makes history interesting.

Jim Vichich, President of the Brighton Area Historical Society, feels the event was well-attended and enjoyed by all.

A giant, fake birthday cake was created for the occasion and floated in the center of the Mill Pond, and the evening was capped off with a 50 Amp Fuse concert and a laser light show. (DK)