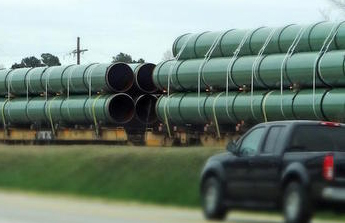 Nexus Gas Transmission is proposing to construct an approximately 255-mile interstate natural gas transmission pipeline to deliver 1.5 billion cubic feet per day of natural gas from receipt points in eastern Ohio to existing pipeline system interconnects in southeastern Michigan. The proposed route of the Nexus Pipeline would travel through Lenawee, Monroe and Washtenaw Counties. The Nexus project is a partnership of DTE Energy and Enbridge, which merged with Spectra Energy this year. The pipeline has not yet received final federal approvals but a number of complaints have been filed with the Federal Energy Regulatory Commission or FERC. Among them is a letter from the Washtenaw County Road Commission noting the company’s refusal to honor the County’s safety, operational and maintenance concerns for the numerous roads the pipeline would cross.

The Road Commission says Nexus repeatedly states the FERC certificate would allow it to pre-empt and override local regulations, to the point of literally claiming it can do “whatever it wants, whenever it wants”. The Road Commission complaint states that most shockingly, Nexus has refused any responsibility to assure that public roads will be cleaned up and repaired after construction is complete. It states Nexus insists on creating driveway access point at improper, unsafe locations, even when where nearby safe locations exist, in violation of all published safety standards. The letter further states the pipeline would not be the first or second pipeline company to come through Washtenaw County but their relations with all others have been far more respectful and satisfactory.

The Michigan Sierra Club is also among those voicing safety concerns with the proposed pipeline route. Nancy Shiffler is chairwoman of the club's Beyond Natural Gas and Oil Committee and questions both the market demand and public need for it, noting Nexus has sold less than 60% of the capacity. Shiffler says the Rover and Nexus Pipelines are essentially parallel to each other through Ohio and into Michigan, crossing through Lenawee and Washtenaw Counties. She says Rover then crosses through Livingston County while Nexus moves to Monroe County but they both start and end at the same place, both feeding into the existing Vector Pipeline and Canada.

Shiffler tells WHMI Nexus has not made the case for the necessity of the pipeline and there are a lot of safety concerns but that is for the Commission to decide. Shiffler says the Commission lost quorum when a couple of members resigned. She says just recently, new commissioners were confirmed by the Senate.

Shiffler says the Road Commission’s concerns about road damage are well founded, considering the collapse of M-50 in Lenawee County during Energy Transfer’s construction of the Rover pipeline. That separate pipeline runs through Livingston County and remains under construction. Michigan Residents Against ET Rover is a local group of concerned citizens, many from the Pinckney area, fighting the project and documenting complaints.

More information about the proposed project is provided through the link. (JM)