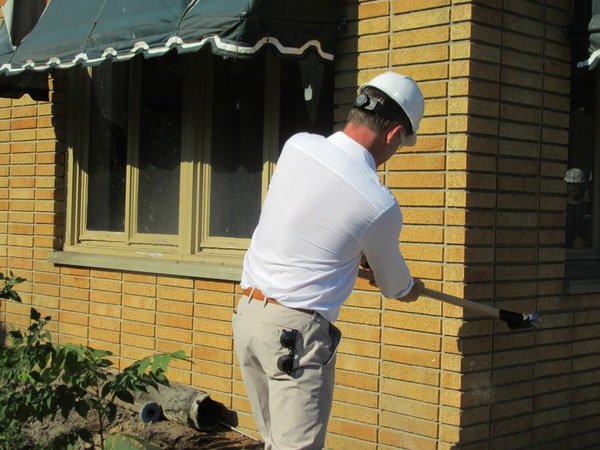 Groundbreaking ceremonies were held today for a new development that city officials say will serve to enhance downtown Brighton’s reputation as a “destination “downtown.

The groundbreaking, by Cheresko Development of New Hudson, marks the beginning of a project to raze the vacant McCririe law offices at 317 West Main to make way for two identical buildings. They will be constructed of brick and mortar and will include restaurants, offices and four loft apartments. Developer Dan Cheresko told city officials and well-wishers attending the groundbreaking that the project would not have been possible without the support of the City Council, Planning Commission, Downtown Development Authority and other city agencies.

Cheresko says the project cost is estimated at $2.5-$3 million. The ground floor of each building will include a restaurant that will seat about 45 customers. One, to be called “Wynwoods”, will have a music theme and will incorporate a piano bar. The other restaurant will be called the “Main Street Steakhouse” and will serve steaks and other menu items. Connecting the two restaurants will be an outdoor courtyard with a gas fire pit and heated paver bricks for the comfort of patrons in cooler weather. The upper floors will include offices and four upscale apartments - two in each building - with balconies and private rooftop sundecks.

There will also be a pedestrian walkway between the buildings – to be paid for by the DDA - which will connect to a public parking lot to the rear.

Cheresko says once the existing property is razed and levelled he plans to start construction, with completion slated for next summer. Pictured: Cheresko Development President Dan Cheresko. (TT)