Lyon Township May Still Be In The Running For Foxconn Facility 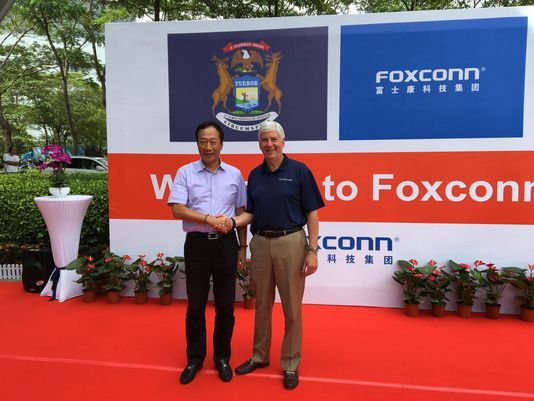 A local community might still be in the running for a development project by a Taiwanese electronic giant.

Foxconn, which builds display panels for televisions and cell phones, announced in late July that it would invest $10 billion in a manufacturing plant in Wisconsin, which seemed to end speculation that the company would place the facility in Michigan, with Lyon Township one of the potential locations. But now Chinese media is reporting that Foxconn says it will build a research and development center in Michigan because of its proximity to the automobile industry. The news came as Michigan Gov. Rick Snyder met Saturday with Foxconn Chairman Terry Gou during his trade mission to China (pictured). Foxconn officials visited Michigan at least three times and have looked at several sites, including one in Lyon Township that totals 515-acres and is owned by construction giant Walbridge-Aldinger.

The potential development follows a series of bills signed by Snyder two weeks ago that would provide significant tax incentives for companies like Foxconn. The lure of the huge investment from the foreign manufacturer was one of the primary selling points for the Legislature to approve the bills last month. Photo courtesy Governor's Office (JK)