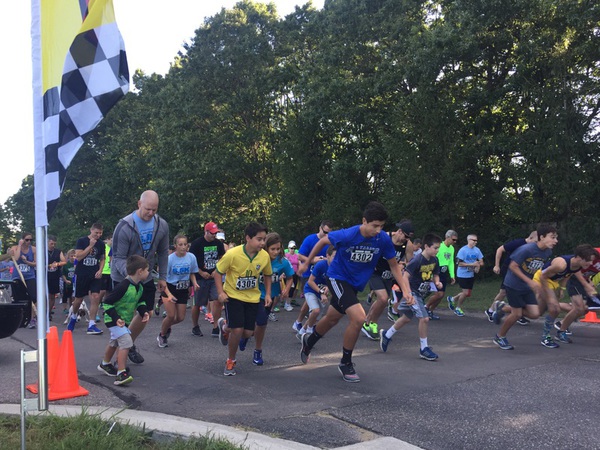 Runners took to the streets in Hartland Saturday morning to raise funds for several organizations while remembering the sacrifice of a fallen hero.

The Sgt. Patrick O’Rourke memorial 5.5K and family fun run kicked off at Hartland High School with more participating runners than last year’s inaugural event. The run recognizes first responders and honors West Bloomfield Police Sgt. Patrick O’Rourke who was shot and killed in the line of duty in 2012. He is survived by his wife Amy and their four children who live in Tyrone Township.

Amy says the funds raised by the race will benefit the Michigan Concerns of Police Survivors (MICOPS), The Hurley Foundation, the St. John the Evangelist Fenton Outreach Program, and the Fenton High School Athletic Department.

Musicians were stationed along the path to encourage runners because Sgt. O’Rourke loved music, according to Amy. She waited at the finish line to greet the participants. The official finish line of the race was located at the 5.5K mark because 55 was Sgt. O’Rourke’s badge number and it means “I’m okay” in police 10-code. Amy tells WHMI she talks to her husband every day and believes he talks back through that number, including the morning of the race. While placing signs and traffic cones before the event, she says she noticed it was 55 degrees outside; an uncharacteristically cool morning for August in Michigan. Amy says signs like that give her and their four children some comfort.

As runners made their way along the route, they passed over the Sgt. Patrick O’Rourke Memorial Highway, which is a stretch of Old US-23 from M-59 to Center Road. At that check point was Sgt. O’Rourke’s father, Dan O’Rourke. He waited next to the patrol car his son was driving the night he was killed. Dan says he acquired it shortly after his son’s funeral.

After Dan received the vehicle, a company outfitted the car for him for free. The rehabilitated patrol car has working lights, sirens, and is emblazoned as the Sgt. O’Rourke memorial vehicle. The license plate is the officer’s date of death and a spotlight underneath the car projects an image of Sgt. O’Rourke’s badge onto the ground. Dan says the first time he saw the revamped patrol vehicle, he was speechless. As runners sprinted past the car, Dan smiled and said, “It’s a piece of my son that I hang on to.” (DK)