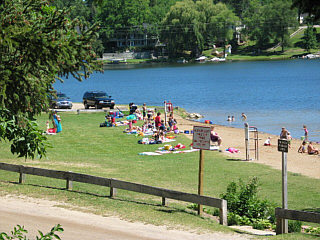 After less than a day, the beach at Howell City Park has reopened after elevated bacteria levels closed it Thursday afternoon.

The beach was closed at approximately 3pm Thursday due to E. coli bacteria levels exceeding what was considered safe for recreational use. But Howell DPS Director Erv Suida tells WHMI that samples taken Thursday morning came back, “well within the acceptable levels” allowing them to reopen the beach earlier today.

While he wasn’t 100% certain as to the reasons for the high levels, Suida says they rake the beach every morning to remove droppings and debris and still conduct an active goose reduction program. However, he says it is possible that during the process of grabbing the sample it became contaminated which resulted in bacteria growth. Suida said that would be considered a false positive, which is why they do follow-up testing. (JK)