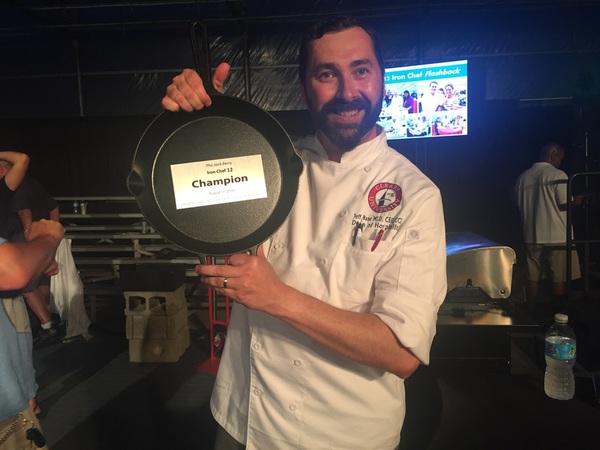 The culinary skills of local chefs will once be tested next week as they compete in the 13th annual Iron Chef competition to benefit the Gleaners Community Food Bank of Livingston County.

Set for Thursday, August 10th at Bordine’s Nursery in Brighton, the culinary competition will pit Chef Jeffrey Bane (pictured), head of Cleary University’s culinary program, defending his 2016 Iron Chef title against Chef Craig Myrand, Culinary Director, Adam Merkle Restaurants, which include Diamonds Steak & Seafood, The Silver Pig, and Cello Restaurante in Howell. Both will be challenged to incorporate a secret ingredient into an appetizer, an entrée and a dessert to be scored by a panel of judges.

The event will also again feature a Mixology competition with last year’s champion, Toni Pomranky of Bourbon Smoke in Brighton being challenged by Sabrina Lewis of La Vita Bistro in Pinckney. Tickets are $50, which include beverages and appetizers as well as a chance to win a taste of the competing dishes.

Last year’s challenge set a record with 655 guests in attendance, but more importantly raised approximately $95,000, which equates to more than 280,000 meals. Gleaners officials say that makes a real difference throughout the year as their Shared Harvest Pantry in Genoa Township serves about 1,200 families a month. For more information or to purchase tickets, log onto the link below. (JK)