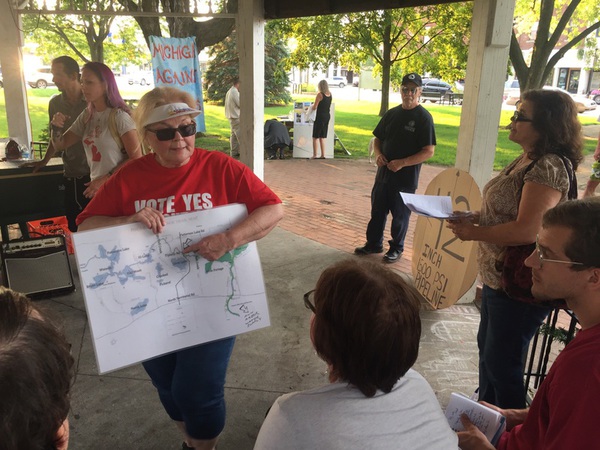 While construction of a natural gas pipeline continues in Livingston County, those in opposition of it are sharing their experiences and stories as to why.

15 miles of the Energy Transfer Rover Pipeline will run through the region and serve as the final section of the 42-inch diameter pipeline. The pipeline, which is over 700 miles long, begins in West Virginia, though construction was recently halted there due to permit violations.

Construction of the pipeline is ongoing in Livingston County and local residents are continuing to hold gatherings to speak out against it. The Michigan Residents Against the ET Rover Pipeline met in downtown Pinckney last night and held an informational rally for the community. Group leaders shared details of the project and residents affected by its construction shared their experiences thus far. One such resident is Kayti Garrett, who says the pipeline runs underneath her driveway. Construction began in mid-July and is occurring just 300 ft. from her home.

She says noise from the construction lasts from 7am to 7pm every day, and that the workers near her house are “very crude”. Garrett says they constantly curse, even while her children are playing outside, and porta-potties had to be brought in because the workers were allegedly relieving themselves on the side of the road. She tells WHMI they are careful if she stands outside and watches them while they work, but that from inside her house, she has seen them commit several violations. Some of those violations include tree cutting past the deadline, creation of large dust clouds, and lack of proper fencing.

In addition to construction and environmental concerns, many residents are worried about the pipeline’s path. Linda Singer lives on Silver Lake and explained that the pipeline runs behind the houses, putting them between its route and the lake. She says that puts all of the homes in the entrapment zone and that if the pipeline was to explode, emergency access points would be cut off and homeowners would have no way of escaping. Singer says her family has lived in the area for many years and is "devastated" to see the change in the region's natural beauty.

Many residents at Wednesday’s rally also expressed discontent with the role local law enforcement has played. Some say in their interactions with authorities regarding pipeline-related matters, they feel they are not being taken seriously or are made to feel like criminals.

The Residents Against Rover group is continuing their efforts to halt construction and encourage citizens to report any violations related to the project that they witness. More information about the organization and their mission can be found at www.overwithrover.com. (DK)