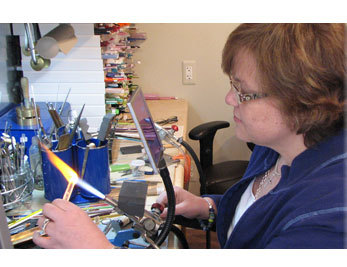 An award winning local glass maker will be holding a workshop hosted by the Brighton Arts and Culture Commission next week.

Dawn Ceccacci is glass artist from Howell. Next Thursday, August 10, she will be bringing her talents to Hyne Alley in downtown Brighton for the next event in the Arts and Culture Commission’s Story of Us: Summer Performance Series. The weekly series has been running since June and has brought several musicians, artists, and storytellers to the downtown streets. Ceccacci has been practicing her craft since 1999 and specializes in lampwork art, which the art of making small, intricate glass beads.

While Ceccacci has made a living off these beads, she also gives back and donates many of them to Beads of Courage. Beads of Courage is a program that supports children who suffer from severe illnesses, and presents the kids and their families with beads that symbolize their strength and courage as they work through treatment. Ceccacci is a 2014 member of their Hall of Fame, and had beads she created represent the program on NASA’s Space Shuttle Endeavor. To learn more about her work, visit www.dawnsglassart.com. For more on The Summer Performance Series, follow Downtown Brighton on Facebook.