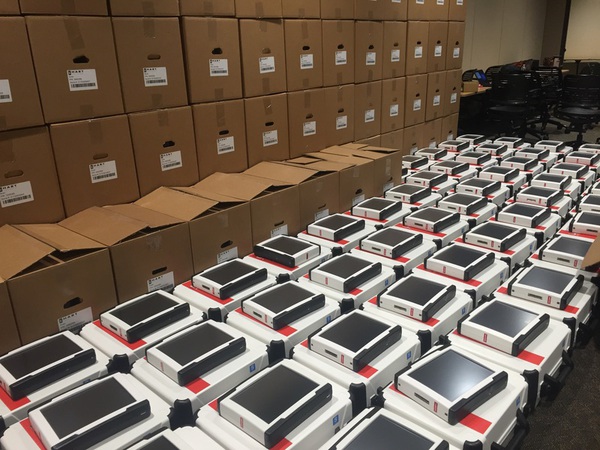 The new machines, from vendor Hart InterCivic Verity, were delivered to the Livingston County Public Safety Complex in Howell on Monday. County and municipality clerks and assistants gathered at the facility Tuesday for the first of several days of equipment testing and paperwork.

Livingston County Clerk Betsy Hundley says the group made tremendous progress on Tuesday, having tested the majority of the ADA devices and their accessories. Hundley says tabulators will be tested Wednesday and Thursday, and jurisdictions that wish to test their own machines will be brought in to do so as scheduled.

Each piece of equipment has paperwork that must be signed in order to authorize the state to make payments to the vendor. Hundley says they’ll tackle that on Friday. She tells WHMI the plan is to have all testing completed in time for equipment pick-up on Monday.

Now that she’s gotten her hands on the machines, Hundley says she’s realizing how much training election inspectors will need. As the equipment will be used for the first time in the November 7th election, she expects training will occur in September. She urges anyone who is interested in becoming an inspector to contact the county or municipalities’ clerk’s office. (DK)