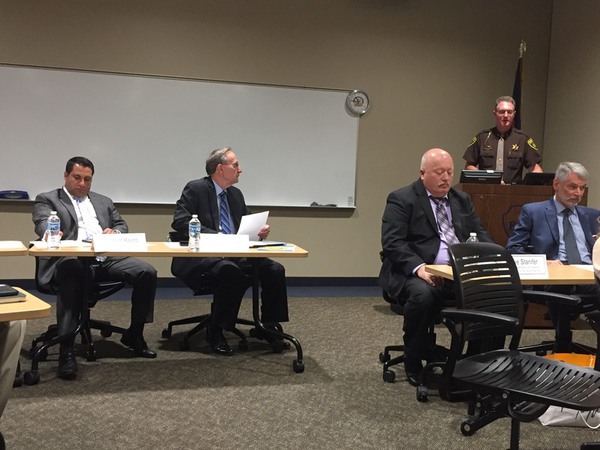 The C.A.R.E.S. Task Force was appointed by Michigan Speaker of the House Tom Leonard after identifying a need to improve services to people suffering from mental illness across the state. C.A.R.E.S. is named for the key elements the panel hopes to address and stands for Community, Access, Resources, Education, and Safety. The bi-partisan group is co-chaired by State Representatives Hank Vaupel of Handy Township and Klint Kesto of Commerce Township. They held the first of their four information gathering meetings at the Livingston County EMS building in Howell.

The 14 member task force heard from Sheriff Mike Murphy, Judges Carol Sue Reader and Michael Hatty, professionals from Community Mental Health, St Joseph Mercy Hospital, Veterans Administration and more. Presenters testified their experiences in dealing with mental health sufferers and what they have noticed working and not working in their fields. A lack of services and providers was a common thread throughout the testimonies. Many talked about reducing the stigma associated with mental illness, as well.

Vaupel said his biggest takeaway from the meeting was how large of a shadow this casts over many areas of society. He said they need to look at the entire spectrum including incarcerations, drug abuse, physical illness, and veterans. Kesto said the problem of getting the people who need services into the right system was too big to solve by just throwing money at it. He said the goal of the task force is to come up with a cutting-edge policy avenue to get ahead of the issues at hand. Vaupel said they will take what they learn from this and their next 3 meetings and use that information to start making the policy changes in early 2018. (MK)