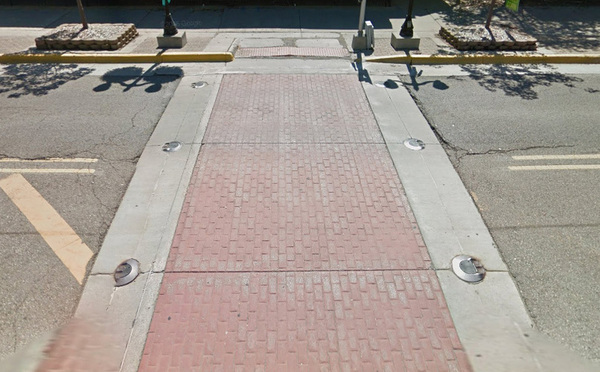 Construction starts today in downtown Brighton on a project to improve pedestrian safety.

The Downtown Development Authority previously approved the purchase of enhanced lighted pedestrian signs that will flash when the pedestrian hits the “walk” button. The new signs will replace the in-ground crosswalk lights and operate much the same as the old ones. Starting today, crews will begin removing the old in-ground crossing lights at four intersections along Main Street as the city prepares for the delivery of the new enhanced pedestrian signs. The holes will be temporarily filled with asphalt and once all of the lights are removed, then the holes will be filled with cement to match the aesthetic of the street and crosswalk.

City Management Assistant Jessica Reed tells WHMI the removal might be a slow process getting started as this is the first time crews will be attempting it. She says construction could take a couple of weeks but should be done before delivery of the new signs.

The crosswalks to be removed are located along Main Street at St. Paul, West, Hyne and First Streets, as well as in the crosswalk at the Millpond. The City of Brighton asks that motorists be alert and courteous while traveling down Main Street throughout the construction process. During the time of transition, the city has placed signs in the center lanes instructing drivers to yield to pedestrians in the crosswalk. The city cautions that police officers will be on the lookout for drivers who speed, fail to yield, or drive distracted.

The current lights were selected for removal due to frequent outages and maintenance issues. The city says the in-ground lights have needed frequent repairs due to damage caused by climate, salt trucks and plows, and general wear-and-tear. Replacement lights are expensive and can only be installed when temperatures are consistently above 50 degrees. As a result, the in-ground lights are often broken, especially during the late winter months. Given the issues, the Department of Public Works determined that the city should pursue enhanced lighted pedestrian signs that will require little maintenance and be operational year-round. (JM)