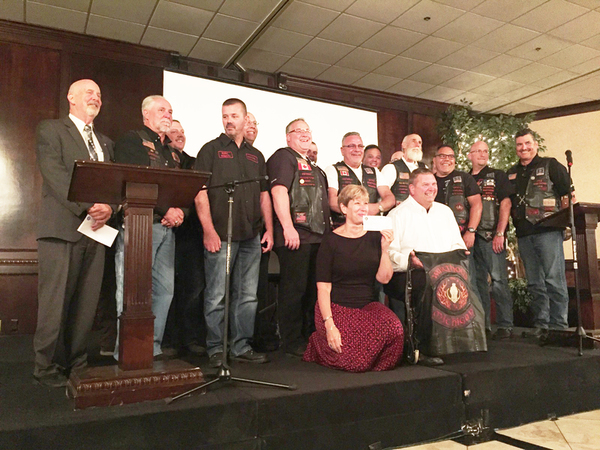 A proposed memorial to honor Michigan’s fallen law enforcement officers is moving closer toward construction, thanks to a fundraising event in Genoa Township.

The Michigan Law Enforcement Officers Memorial Monument is a project that has been in the works for many years. Proponents are looking to construct the memorial in Lansing, in a display of 21 glass panels engraved with the names of fallen officers along a walkway. The “Raising a Sentinel” dinner at Crystal Gardens Banquet Center last night served as a fundraiser to help bring the project to fruition.

Individuals with ties to the law enforcement community spoke at the event on the importance of the monument and what it means to them personally. The evening was emceed by Livingston County Sheriff Mike Murphy, who introduced presentations from Michigan State Police First Lt. Joseph Thomas, Commander of the Lansing Post, and Blaine Koops, Executive Director of the Michigan Sheriffs' Association.

Robert Stevenson, Executive Director of the Michigan Association of Chiefs of Police, also spoke at the dinner. He says over 600 police officers have been killed in the line of duty throughout Michigan’s history, with the state traditionally in the top ten in the U.S. with the highest number of fallen officers each year. Despite ranking high on the list, Michigan will actually be one of the last states in the nation to erect a monument honoring its fallen officers.

In 2014, the Michigan Legislature passed an appropriation of up to $2(m) million in the form of a two to one matching fund grant for the project. However in order to receive the grant, the money for the project must be raised by October 1st of 2018. Sharon Lollio organized the dinner, knowing that there isn’t much time to meet the fundraising goal of approximately $900,000.

At the dinner, Lollio was presented with a check from the Sheriffs & Municipal Memorial Assistant Response Team for $2,500 toward the project. The event was also attended by members of the Detroit Chapter of the Warthogs Motorcycle Club, which is comprised of public safety officials, who made a donation of $3,000. The final amount raised through the dinner hadn’t been tallied by the end of the night, but members of a commission focused on funding the project say its these types of events that will make the dream a reality, little by little.

You can find more information about the monument and its fundraising efforts at the link below. (DK)