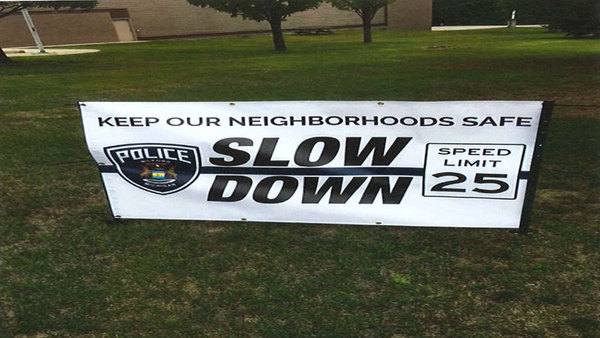 The next phase of a neighborhood safety program is being rolled out in an effort to slow traffic in residential areas within the Milford area.

The Milford Police Department has purchased three large yard signs that read “Keep Our Neighborhoods Safe: Slow Down” and also show a 25mph speed limit sign to serve as a reminder to motorists. The signs will be placed at strategic locations throughout the community for short periods of time but also can be loaned to residents to place in their yard as a means of reminding neighbors and guests to keep speeds down.

Milford Police Chief Tom Lindberg says Milford is one of the safest communities in not only Michigan but the country. He says much like police departments can’t take all of the credit for a low crime rate; they also can’t slow traffic without help from residents. He says the new signs will not only serve as a visual reminder but create opportunities for neighbors to communicate.

The most frequent issue brought up by residents is said to be the speed in which motorists travel through their neighborhood. Lindberg says most people who are stopped by an officer for violations in a subdivision, either live in or around that same neighborhood. He notes communication is key and asks that residents talk to neighbors, young drivers, frequent visitors and homeowner’s associations about slowing down in neighborhoods.

The first phase of the program involved officers distributing ribbon shaped car magnets to residents that read “slow down in our neighborhoods”. Any residents wishing to take part in the program or requests a sign should contact Milford Police. (JM)