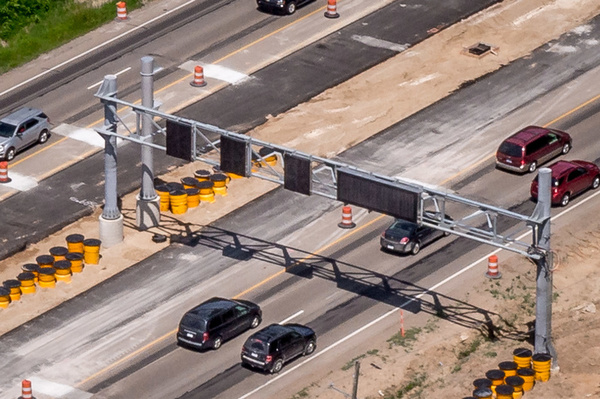 Crews with the Michigan Department of Transportation have been busy with multiple work zones along US-23 from M-36 to M-14 and visible progress is being made. Once complete, the new traffic system will manage congestion and promote safety. 18-foot-high gantries are going up along the corridor and 22 out of 30 have already been installed. The North Territorial Road interchange and ramps are now open; which includes two new roundabouts and the existing bridge has been demolished. The new roundabout to 8 Mile is also open but 6 Mile remains under construction.

M-DOT Spokeswoman Kari Arend says there are still ramp and bridge closures, with work taking place at certain interchanges to extend the acceleration and deceleration lanes. Arend tells WHMI for as big of a project as it is, the contractor is really moving along. She says a lot of different operations are taking place throughout the corridor, with work progressing on the median lane that will eventually become the Flex Route in both directions.

Crews are also working on other components including the Intelligent Transportation System or ITS, which is all of the electronic signage that will be going in to help control the Flex Routes. Arend notes a lot of that is already in place and motorists have likely noticed the large overhead signs.

M-DOT will be rolling out an awareness campaign in the future to educate motorists about the new traffic management system. In the meantime, Arend says M-DOT is continuing with off-peak lane closures along US-23 to minimize the impact to motorists. She says a lot of overnight, single lane closures can generally be expected, along with some weekends for concrete patching.

The goal is to have work mostly wrapped up by mid-November.
Construction updates and the July project newsletter can be found through the link provided. M-DOT photo. (JM)