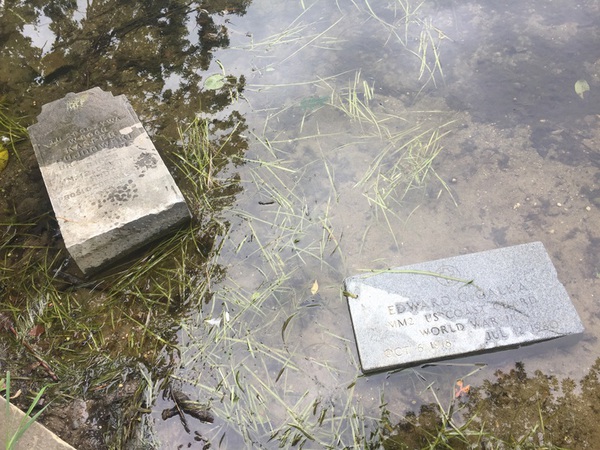 A number of gravestones were recently discovered in a small Green Oak Township lake, though how they got there and why they were put there remains a mystery.

Bob Tyrer, a fisherman and resident who lives along Briggs Lake, says he was in the shallows of the lake about two weeks ago looking to see where fish were bedding. It was in those shallows behind a neighbor’s house that he came upon three large gravestones. Tyrer says he immediately felt like something wasn’t right, and seeing the names etched into the stones hit him “like a punch in the gut”.

Two of the stones are written in foreign languages, one appearing to be Polish, with birth dates in the 1800's. The third shows a death date of 1980, and that the individual behind that gravestone was a member of the U.S. Coast Guard and served in WWII. A man has since come forward to say he was the son of the WWII veteran, adding that he hasn’t seen the headstone at his father’s resting place at Mount Olivet Cemetery in Detroit since 1981. Tyrer says the man has said he'd like to come pick up his father's gravestone, and Tyrer hopes to meet him when he does.

A fourth headstone belonging to an infant was later found, and Tyrer found part of a fifth gravestone Wednesday. Tyrer says police were contacted and came to the residence, but acted like it wasn’t an unusual situation. Calls to Green Oak Township Police seeking comment have not been returned at this time.

The neighbor living on the part of the lake where the stones were found hasn’t seen or heard anything unusual that could be associated with the dumping of the gravestones. Tyrer feels because of the weight, the gravestones clearly didn’t end up in the lake as a result of an act of nature, and that it would require multiple people to pick them up and bring them down to the lake’s embankment.

Tyrer says the people connected to the gravestones deserve to have them brought back to where they belong, and that he won’t sleep until the situation is made right. (DK)