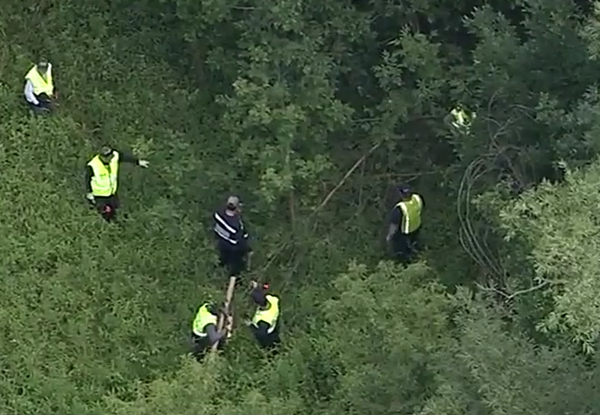 A Livingston County mother and father joined more than 150 police officers and volunteers in another massive search effort to find their missing daughter, which failed to turn up anything.

Searchers fanned out at Hines Park in Livonia on Wednesday searching for the body and belongings of 28-year-old Danielle Stislicki of Farmington Hills, who is presumed dead. The investigation shifted after the arrest of 30-year-old Floyd Galloway of Berkley, who is charged in connection with the attempted rape of a woman in Hines Park in October. Galloway has been dubbed a "person of interest" in Stislicki's case and previously worked as a security guard at the same MetLife office in Southfield where she worked and was last seen. Police say no direct information was obtained from Galloway but FBI profilers noted that criminals often return to the scene of previous crimes. Farmington Hills Police Chief Chuck Nebus said it was routine, and a natural place to search because Galloway was arrested for a crime in the park. Danielle’s parents, Richard and Ann Stislicki, live in Fowlerville and said they’re grateful for the many men and women of law enforcement and their expertise who were involved in the search and for those that have helped since the beginning. Ann Stislicki said they were with heavy hearts Wednesday and will continue to do what it takes to bring Danielle home, adding they hope to remain strong along with their family and the public who have supported them since her disappearance. Stislicki also asks that people "search areas in their surroundings and local neighborhoods" for items including Danielle’s sky blue colored three-in-one Eddie Bauer coat, black zip-up shirt, blue jeans and burgundy boots. The public is also asked to look for a tan- and brown-striped comforter, which police say could also be important to the case. Police have executed more than 60 search warrants in the case, although the Hines Park search was the largest and more intense.

Anyone with information about the disappearance of Danielle Stislicki is asked to call Farmington Hills Police at 248-871-2610. More information can be found through the link provided. Picture courtesy of clickondetroit.com (JM)