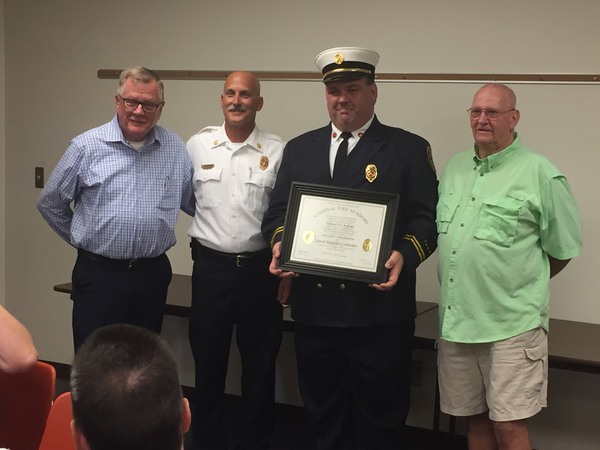 A local fire department officer has received a prestigious award that few others can make a claim to.

Howell Area Fire Department Fire Marshal Jamil Czubenko received a certificate recognizing his completion of the Executive Fire Officer program at the Fire Authority’s meeting, Wednesday night. This is one of the highest academic achievements from the National Fire Academy. The EFO designation is difficult to come by as only 25 officers are accepted into the program each year, and many fail to finish once accepted into it. It is a 4 year program that takes place 2 weeks each year, with a thorough research paper required at the end of each term. Czubenko said he took the challenge very seriously. Czubenko wrote papers on health and wellness within the fire department, preplanning, instant action plans for downtown businesses, and a fourth on recruiting and retaining firemen.

Before Czubenko, only 3 officers in Livingston County had received the designation, and 2 are retired. Those two are former Howell Area Fire Department Chief Jim Reed (far left), and former Deputy Chief Jim Porter (far right), who were both at the ceremony to congratulate their colleague. Current Fire Chief Andy Pless (in white) said Czubenko (holding certificate) is a valuable asset to the department and this award shows off his commitment to the community and to himself. Pless also has the EFO certification. (MK)