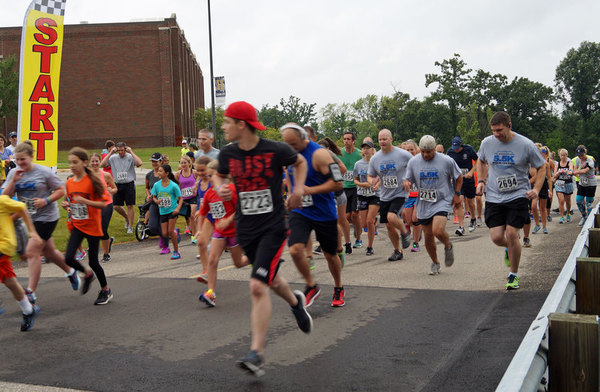 A fundraiser in Hartland this weekend will recognize first responders and pay tribute to the memory of a fallen hero.

West Bloomfield Police Sergeant Patrick O’Rourke was shot and killed in the line of duty in September of 2012. He is survived by his wife Amy and their four children who live in Tyrone Township. A 5.5k race and fun run will be held this Saturday, August 5th at Hartland High School to honor Sgt. O’Rourke’s memory and celebrate all first responders.

Part of the 5.5k’s course includes the Sgt. Patrick O’Rourke Memorial Highway which is a stretch of Old US-23 from M-59 to Center Road. Amy O’Rourke says the 5k is timed, but the official finish line is at the 5.5k mark because of the number’s significance. Patrick’s badge number was 55 and 55 means “I’m ok” in police 10-code. Amy says there are countless instances in which her husband has reached out to her and her children through that number since he was taken.

The race will include a Family Hero Fun Run, which children can participate in by doing a lap around the school’s track. Funds raised from the event will be split among four community organizations; the Michigan Concerns of Police Survivors (MICOPS), The Hurley Foundation, the St. John the Evangelist Fenton Outreach Program, and the Fenton High School Athletic Department.

Amy says the event will be a happy and fun one because that’s who her husband was. She says it’s important not to focus on how he died because it’s really about celebrating how he lived.

Race and registration details are available at the link below. (DK)