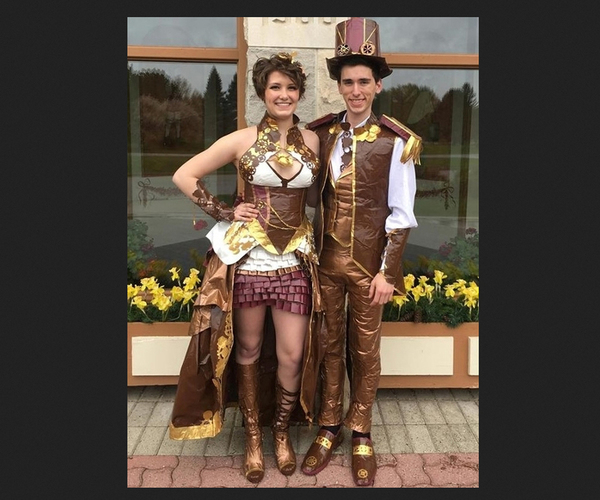 A national prom duct tape contest turned out to be a not-so-sticky situation for a Fowlerville couple.

18-year-old Rozlin Opolka and 19-year-old Conner Hawry, a 2016 Fowlerville Grad, took 3rd place in the Stuck on Prom Scholarship Contest. The contest’s winners were chosen based on online voting. The couple was awarded $3,000 each in scholarship money for their hand-crafted prom attire made out of duct tape.

Using 34 rolls of Duck Tape brand, the couple spent about 50 hours crafting a dress and tuxedo with a steampunk theme. Their outfits included tiny gears sprinkled throughout that had to be meticulously cut out. Opolka’s skirt featured alternating ruffles to create a bustle and train in the back, and a mini skirt in front. They also made a top hat and steampunk goggles. Altogether, Opolka guesses they spent about $90 creating their attire.

The couple has been dating for about a year and both have college plans that will allow them to utilize the scholarship prize. Opolka intends to study art at Western Michigan University in the fall, while Conner, who just finished a year at Lansing Community College, plans to transfer to Michigan Technological University. (DK)