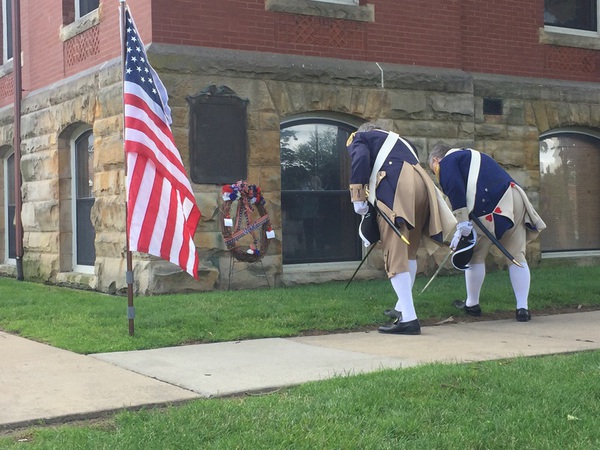 The names of Livingston County soldiers who gave their lives during World War I were read aloud on the lawn of the historic courthouse in Howell this morning. Flags were presented by the Sons of the Revolution Color Guard and a wreath was laid beneath a bronze plaque on the courthouse in honor of the 26 soldiers from Livingston County who perished.

The event was led by the Philip Livingston Chapter of the Daughters of the American Revolution, or DAR, to commemorate the 100th anniversary of the United States’ entry into the First World War. Chapter Regent Laurie Mentley says the National Society Daughters of the American Revolution has joined the United States WWI Centennial Commission with a goal to educate people about the war, lest we forget the lessons that were learned.

Mentley says the Chapter decided to hold this event upon learning of local soldiers’ involvement in the war. 16 of the 26 local fallen soldiers fell in France and were buried there. Of the remaining 10, seven died of influenza or ammonia, and there is no record of the fate of the last three. Though this event is the first that the local DAR chapter has hosted, Mentley says they plan to hold more in the future, noting that 2018 is the centennial anniversary of The Armistice. (DK)