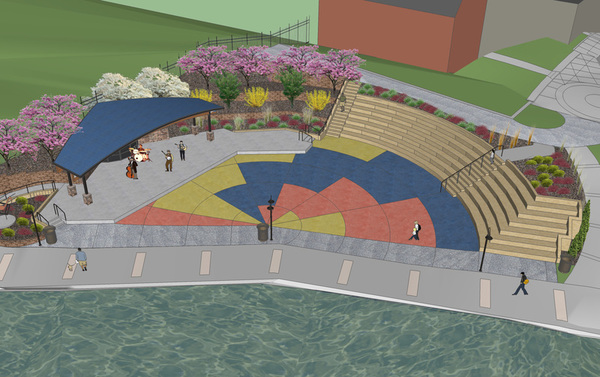 A group of concerned residents is expected to be in attendance at the Brighton City Planning Commission Monday to protest the recommended removal of trees to make way for a planned Mill Pond band shell and amphitheater project.

The group says the project would result in the destruction of several “heritage” trees, and they assert that the city should alter the plans in order to save the trees. Joyce Powers of Hickory Dr. and Beth Walker of Hillcrest Dr. addressed council at its June 6th meeting and criticized the plans. Powers, a former member of the Brighton Board of Education, told council she was shocked when she was told the trees wouldn’t fit in the design plans for the band shell and amphitheater and would have to be removed. Last Sunday at the Kiwanis Gazebo concert, Powers and Walker distributed a “letter of concern” addressed to City Council, asking those in attendance to sign if they agreed the trees should not be cut down. Walker says no one refused to sign it and they gathered about 200 signatures.

“There is some misinformation (being circulated),” says City Manager Nate Geinzer about the opposition to the tree removal. Geinzer says the master plan had been presented at previous meetings, with the design and plans for the bandshell and amphitheater. Geinzer adds there will be "no catastrophic destruction” of trees between the area behind the planned bandshell and the Old Village Cemetery, which is also city property. Initially, Geinzer previously said five trees would be removed under the proposal: three Northern Oak and two Black Locust, which may be considered an invasive species. However, two arborists were at the site Thursday and concluded that one of the Northern Red Oaks can remain, reducing the tree impact to four. The proposal also calls for 11 new trees to be planted, including Redbud, Dogwood and Little Leaf Linden. More details are posted on the city’s Facebook page, a link for which is posted below.

At the last council meeting, Mayor Pro Tem Shawn Pipoly told those in the audience that it’s not the city’s general fund but the Downtown Development Authority (using captured local commercial tax dollars) that will pay for the bulk of the estimated $650,000 project, augmented by a “very generous private donation.” However, Council Member Jim Bohn responded that since all city taxpayers are impacted by DDA projects, they deserve to be part of the decision-making process.

If approved by the Planning Commission, the master plan for the project will go on to the City Council for final approval. The bandshell is slated to replace the current gazebo, and the adjacent amphitheater will be an upgraded version of the one that already exists. (TT)