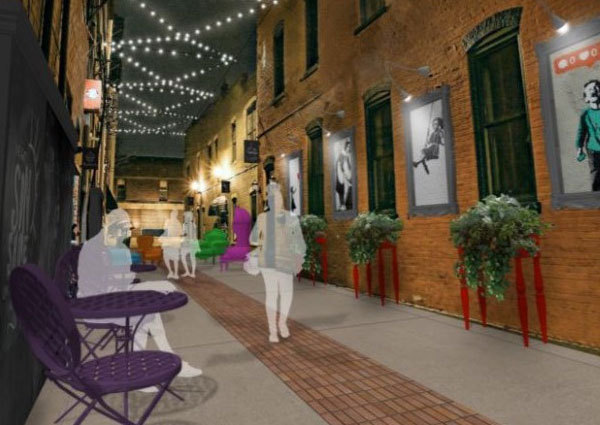 Residents and visitors will start seeing new and happening things around downtown Howell later this season.

There has been an initiative of late within Howell to start making it more bicycle-friendly. Downtown Development Authority Director Cathleen Edgerly said they have formed a positive relationship with the state towards this. Some “Share the Road” signs are up and the city is working with the Michigan Department of Transportation to identify and address issues like bike crossings and parking downtown. Edgerly said new bike racks are being made that will fit in with and add to the downtown character. Hell Creek Forge blacksmith Jim Roth has worked with the city before and expects to have the first new rack ready to be installed along Grand River Avenue later this summer. While riding downtown, bicyclists can check in on the progress being made in Peanut Row Alley.

The DDA, along with the City, local businesses, and leaders was successful in their crowdfunding campaign to raise $12,000 for renovating the alley located between Dairy Queen and Uptown Coffeehouse. Because they met their goal, they will receive matching funds from the Michigan Economic Development Corporation. Edgerly said now that they know the grant money is coming, they have begun talks with a contractor to get materials for all of the improvements like new seating, lighting, and wall decorations. The goal for people to be able to begin enjoying Peanut Row is late summer-early fall. (MK)