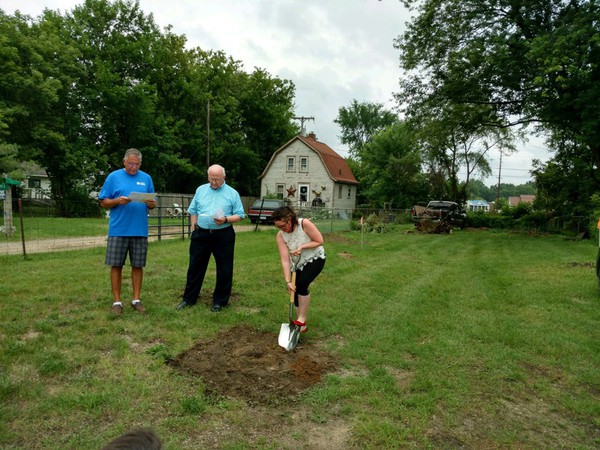 A groundbreaking ceremony was held Thursday afternoon for the new Habitat for Humanity build in the City of Howell.

Livingston County Habitat for Humanity marked its next build with a blessing and prayer at an empty lot on North Street in Howell, which will be the new home of Becky Gremore and her two children – 12-year-old Anthony and soon to be 10 Dahlia. A prayer to bless the construction phase marked the event, which was well attended by local officials, donors, board members, and Gremore, who helped turn the dirt during the blessing of the ground.

Habitat for Humanity Habitat officials said there could not be a person more deserving. Gremore had a tough childhood and was in and out of foster homes but managed to graduate with honors from Howell High School and has held steady employment. She currently works at Toyology in downtown Howell.

After getting divorced, Gremore and her two children lived in her friend’s basement while trying to find something she could actually afford in the area as a working mom. She told WHMI that was no easy feat and she applied for a Habitat for Humanity home after seeing an ad in the ReStore. Gremore first qualified for a home and was shown a property on the edge of Livingston County and was extremely grateful but had to decline. Gremore told WHMI she didn’t want her kids to go through any more change, saying the divorce was hard enough on them and she also wanted them to stay in Howell schools but everything fell into place and Habitat remembered the vacant but odd-shaped lot in Howell and she was sold.

While the lot where her new home will be built is a bit tiny, Gremore says it’s perfect for her and her two children, as well as others she hopes to foster one day. Gremore says it will have a cute front porch and her kids will be able to ride their bikes around the neighborhood, adding the home is blocks from the beach and her work.

Habitat for Humanity homes are not a hand-out but a leg up for someone right at the cusp where they just can’t quite get ahead but have worked hard to get where they’re at. Gremore has already invested more than 100 hours with Habitat and if all goes as planned, construction should proceed pretty fast and her new home could be done by November. (JM)