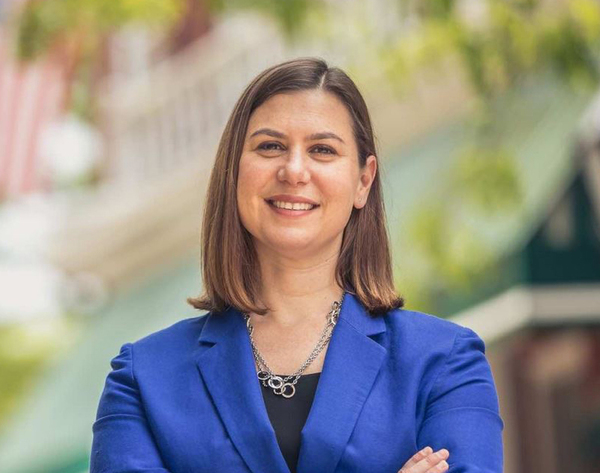 A national security expert who has worked for both the Bush and Obama administrations made it official Monday that she is seeking the Democratic nomination to unseat Republican Congressman Mike Bishop next year.

Elissa Slotkin of Holly is a former Acting Assistant Secretary of Defense and says she wants to bring a deep commitment to public service to residents in the 8th Congressional District, something she believes is currently lacking on the part of Bishop. Slotkin joined the Central Intelligence Agency following 9/11 and ended up serving three tours in Iraq, where she met her husband, a former Apache pilot, who retired as a colonel from the U.S. Army after 30 years of service. After serving overseas, Slotkin worked for President Bush as a member of his national security staff and was asked to stay on when President Obama took office in 2009, where she eventually became Acting Assistant Secretary of Defense. At the Pentagon, she says she negotiated sensitive matters including the fight against ISIS and the U.S. response to Russian aggression. Slotkin told WHMI that in no way should the United State consider Russia as an ally.

Slotkin, whose mother died of ovarian cancer in 2011, tells WHMI that Congressman Bishop’s votes to repeal the Affordable Care Act and replace it with a GOP plan that would cover millions of fewer Americans was one of the main issues motivating her to get into the race. "He either doesn't understand what he voted for or doesn't care about the consequences for the people in his district. Given how personal this was for me, it really motivated me to get in the race. He has a history of taking money from the health care industry, from the prescription drug industry, going back to his time in the Michigan Senate, so it's just time for something different, for someone who puts public service first."

Slotkin says she understands that the 8th District has been solidly Republican, but feels that that if the 2016 election proved anything, it was that people are tired of “career politicians who seem to have forgotten that they are public servants elected to do one, simple job: improve the lives of the constituents they have the privilege to represent.”

When asked for comment on Monday's announcement, Stu Sandler, a spokesperson for the Mike Bishop for Congress campaign said, “It's the Jon Ossoff plan that Democrats are trying all over the nation. Take a Hillary staffer, transfer them into a district where they have little ties, and see what happens. It didn’t work in Georgia and I think Michigan voters are skeptical of this type of political maneuver." To that, Slotkin responded that her, "record of national service is clear. I have spent the past 15 years serving my country in the intelligence and defense communities, including three tours of duty served in Iraq. I am a third generation Michigander. I grew up here, I went to school here, my family is here. Michigan is home. It’s unfortunate that Rep. Bishop sees fit to criticize me for spending my career in national service. I would much rather spend time talking about the important issues impacting voters in the 8th district." (JK)