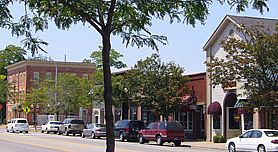 A former Brighton City Council member says that the public should have to pay to park on downtown streets and in downtown parking lots. Dennis Nauss, who served several terms on council mostly in the 90’s, told council Thursday night that other area communities the size of Brighton charge for parking and Brighton should, as well. Nauss said his reasoning is that if the city required that shoppers, diners and others coming downtown pay for parking, the resulting revenue could be used to give city taxpayers a break on their city taxes. Nauss said that merchants might see an economic advantage to customers parking for free downtown, but residents are not reaping the benefits of it. Mayor Jim Muzzin said in response to Nauss that the Downtown Development Authority had in the recent past discussed the possibility of charging for downtown parking, although the decision would be up to City Council. Brighton at one time did have meters downtown, but they were eventually removed because council at that time felt it was a detriment to attracting shoppers when they could go to nearby malls and park for free. Others on council have stated in the past that parking at malls and shopping center might be free, but there’s a downside, since they often have to walk a considerable distance. It has also been said that the advantage to free on-street parking over mall parking is that shoppers and diners can park very close to their destination. (TT)