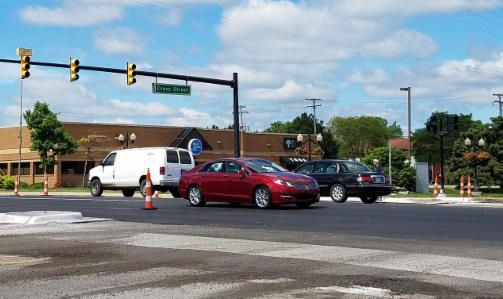 Brighton city officials say that one aspect of the recently-completed West Grand River project that hasn’t gotten any attention has improved safety as well as traffic flow.

The bulk of the $1.1 million cost was paid by the federal government, with the city providing a $300,000 local match. In the project, crews milled the surface, repaired and replaced catch basins, did work on seams and joints and applied a new asphalt surface. Residents and visitors alike have been impressed by the resulting improvement on Brighton’s main thoroughfare, from the elimination of the many “curb cuts” to the smoothness of the road surface. Another positive aspect of the project – done at the city’s request– was elimination of the center traffic islands on Grand River at the intersection of Cross Street.

In addition, parts of the left-and-right turn islands that lead from Grand River to Cross, and vice-versa, have been reduced in size. City Manager Nate Geinzer tells WHMI that is to allow for better traffic “stacking”, and as a safety factor.

Geinzer says the safety improvement is due in part to the fact that the islands had high curbs which could be problematic in winter, with accumulated snow and difficulty in drivers seeing the curbs. Some $122,000 of the total project cost went to Tetra Tech for engineering services, and was part of the local match. The project is essentially done, except for what Geinzer calls “a couple of punch list items.” (TT)