Homeowner At Odds With City Of Brighton Passes Away At 91 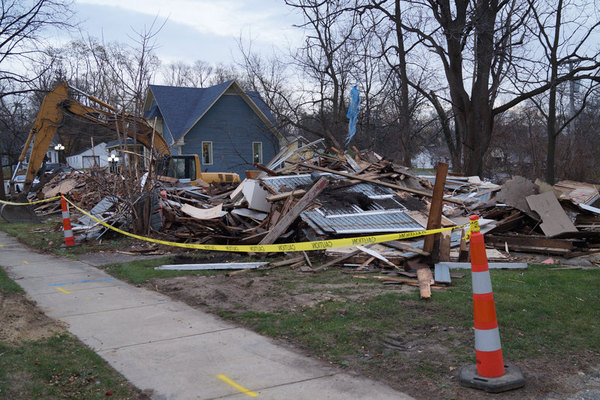 Visitation will be held this afternoon for a Northville man who was known for his legal battles over homes he owned in the City of Brighton.

Leon Bonner passed away on July 3rd at the age of 91. Leon and Marilyn Bonner owned homes and properties at 116 and 122 North Street at the eastern edge of the downtown area, which the City of Brighton had condemned a number of years ago and many felt, were an eyesore. The Bonners contested the city’s plans to have the homes demolished, saying they hadn’t been given a chance to renovate them and bring the homes up to code. The legal battle spanned years and the Bonners took their case all the way to the Michigan Supreme Court but to no avail. Demolition crews razed the homes in November of 2015 (pictured).

Bonner is survived by his wife Marilyn, children, grandchildren and many great-nieces and nephews. Funeral arrangements are being handled by L.J. Griffin Funeral Home at the Northrop-Sassaman Chapel on Northville Road at 7 Mile from 1:30 – 8pm today. His funeral will be on Friday at 1:00pm. Bonner will then be laid to rest at Rural Hill Cemetery with military honors.

The family asks that memorial contributions be made to the Alzheimer's Association. (JM)