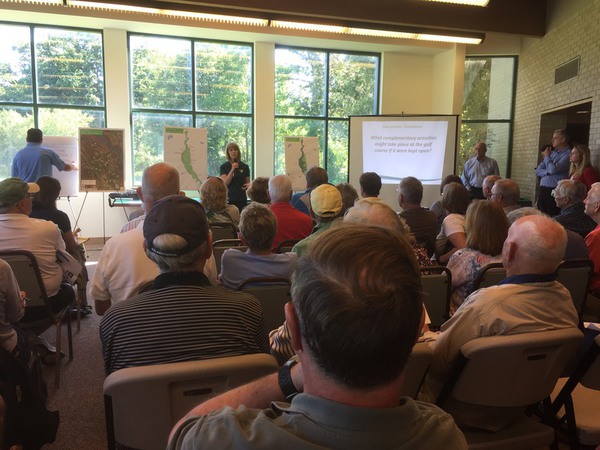 A public meeting was held to gather ideas from golfers who are hoping to save a local course.

It was standing-room-only in the Hudson Mills Metropark Golf Course Starting Center, with many more looking on from outside the building earlier this morning. The Huron Clinton Metropolitan Authority held this special session after hearing disapproval around the Hudson Mills Metropark master plan which proposes possibly shutting down the course and repurposing it into a natural area. The HCMA divulged during a presentation that the Hudson Mills course is the only Metropark course losing money annually. They report losing an average of $72,000 a year since 2013.

If the course is kept open, they need to plan for around $1.3-million in capital and equipment improvements. That includes new carts, path reconstruction, irrigation heads, and piping at the pump station. The Authority spent the remainder of the time gathering feedback and ideas on how to cut costs and improve revenues from those in attendance. Several thought that the Metropark needed to do a better job at advertising the course. While it has high recommendation rating online, it is located in a low-density population area and sees around 10,000 fewer rounds a year played as opposed to the other Metroparks.

Many believed that the absence of a driving range is a deciding factor that causes golfers, including the Dexter High School golf team, to play elsewhere. It was explained that designated biodiversity areas, the DEQ, and the DNR make it complicated to just add a range.

Dave Kirbach, Deputy Director for the Metroparks said he was thrilled at the turnout and believes the public’s voice will be heard. Kirbach said no decision has been made on closing the course, but he has a hunch this will make the commissioners more aware of what is going on. He said he can’t speculate on what decision they are going to make, but it was a very positive meeting and he believes it will help in the decision making process. An evening meeting with the same opening presentation and information is scheduled for Wednesday July 19th, to give those who couldn’t attend today a chance to share their thoughts. That meeting will take place at Creekside Elementary in Dexter, beginning at 6pm. (MK)