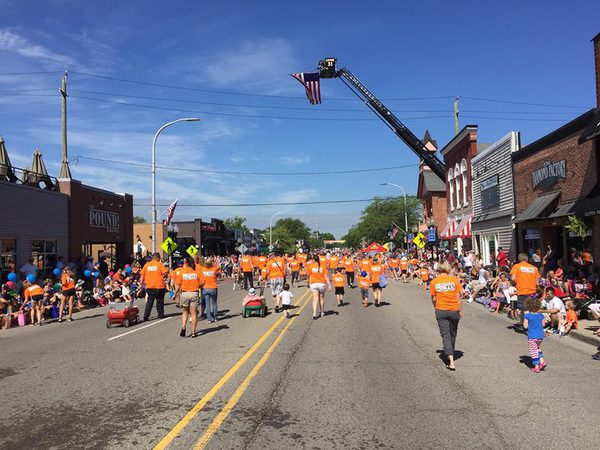 Per tradition, the community will come together for Brighton’s 4th of July parade and activities.

The Brighton Area Fire Authority and The Livingston Sunrise Rotary Club are sponsoring the 2017 Brighton Independence Day Parade on Tuesday, July4th. Over 75 floats, bands, cars and fire trucks are featured as part of this year’s parade, which steps off at 10am sharp from Main and Church Streets and ends at Brighton High School. The parade will begin at the BECC building at the corner of Main and Church Street, proceed west on Main Street to 7th Street before heading south and ending at the Brighton High School parking lot. Shuttles will be available between the BECC building and parking at the high school. There will be some road closures in the Grand River and Main Street areas associated with the parade. Main Street will be closed through downtown for the duration of the parade.

Brighton Fire Chief Mike O’Brian says the City of Brighton is starting to celebrate its 150th anniversary, which is a significant milestone. The theme of the 2017 parade is “Building Community for 150 Years” and this will also mark WHMI’s Buzz Elliott’s 20th consecutive year announcing the parade. Theme trophies will be awarded for the most musical, patriotic and creative parade entries. O’Brian tells WHMI they want everyone to come out and be part of the celebration. Over at the Mill Pond, he says they’ll have a ladder truck set up so kids can cool off in what’s being deemed Brighton’s largest sprinkler.

The Hungry Duck Run kicks off the holiday and helps raise awareness and funding to fight hunger in Livingston County. Raffle tickets will also be available for the Livingston Sunrise Rotary Club’s Duck Race, which is a race of rubber ducks down the Mill Pond for prizes. The raffle portion of the event will be held after both runs are over and announced after the 4th of July parade held on Main Street in downtown Brighton at the Mill Pond around 11:15am.