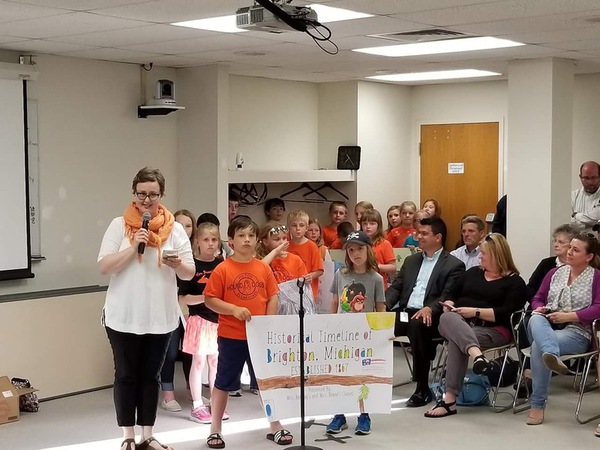 A novel aspect of Brighton’s 150th Anniversary bash this summer is a floating birthday cake that will be in the Mill Pond on Aug. 13th, the day of the Block Party - the highlight of the anniversary celebration.

According to Mary Beane, a Brighton 3rd grade teacher who is on the 150th Anniversary Committee, the cake is being fashioned by the Constantine Construction Co. of Brighton. The size of the cake hasn’t been determined yet, but it will definitely be a big one. Beane tells WHMI the cake will have solar lights which will be illuminated during the weekly Sunday evening Kiwanis gazebo concert, and will include depictions of Brighton’s 150 years as a community.

The commemorative floating cake isn’t the only aspect of the 150th Anniversary in which Beane has been involved. This spring, Beane got the students in her classroom, and students in other 2nd and 3rd grade classrooms, involved in developing a 14-poster pictorial timeline of Brighton, up to the time it became a village in 1867. The timeline extends from when only Native Americans lived in the area to the settlement called Ore Creek, which later became Brighton. During that period, the creek was dammed to facilitate a grist mill for grinding the grain supplied by settlers into flour, and having a grist mill there caused the community to grow.

The other student project was making collages on 9-by-11 canvasses that give side-by-side, then-and-now, comparisons on historical parts of the city, such as the old “Pink Hotel” — now Brewery Becker - and the Mill Pond. The timeline was presented to the student body at an assembly in March at which Mayor Jim Muzzin was the guest speaker. The students reciprocated by giving a presentation on the timeline pictorial and collages at the June 1 City Council meeting. The completed student projects will be available for viewing by the public at the 150th Anniversary booth at the CoBACH Center and at some downtown businesses during the summer months. Photo courtesy of Renee Pettengill. (TT)