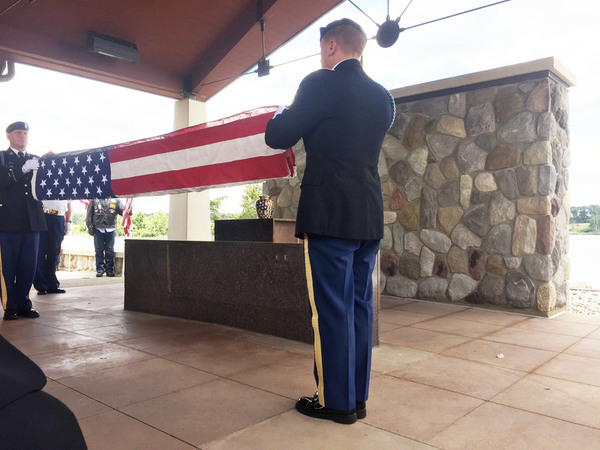 The legacy of a highly decorated WWII combat veteran and Howell resident was cemented Tuesday, as the family and friends of Donald Burgett gathered to honor the man they won’t soon forget.

Don Burgett, who passed away in March just before his 92nd birthday, is frequently described as “larger than life”, and his numerous achievements substantiate that claim.

The paratrooper and member of the 101st Airborne Division was just 19 when he parachuted into Normandy on D-Day. He was a member of A Company, the 506th Parachute Infantry Regiment, and helped liberate four concentration camps. In his lifetime he received the French Legion of Honour, a Purple Heart, and a Bronze Star. His lectures are kept in the Library of Congress and he has written several books, one of which is considered a classic and received an endorsement from President Eisenhower.

That memoir, “Currahee; A Screaming Eagle at Normandy,” was what led his longtime friend Mark Bando to him. After reading an excerpt from the book, Bando was impressed by Burgett and called asking to meet him. Burgett obliged and their meeting in 1971 led to a lifetime of friendship. Bando says Burgett got his start as an author when he began writing his stories on brown paper bags. He later traded scuba diving equipment for an old typewriter which he used to write the entirety of "Currahee" on.

Bando spoke at the internment ceremony for Don, held at the Great Lakes National Cemetery in Holly. Bando says his friend was a role model who he could talk and share stories with for hours.

Around 200 people attended the ceremony and a luncheon held afterwards. Don’s daughter, Renee Burgett-Powell, says the large turnout is indicative of the impact her father made on people. Looking around at the number of people who attended the luncheon, Renee noted that her dad's reach "went far and wide” and that “there wasn’t a stranger in the world, just friends he had yet to meet.”

Renee and many others shared stories about Don and his well-known qualities, speaking of his integrity, work ethic, and dedication to doing what is right. A memorial for Burgett was held in April and the internment ceremony seemed to serve as a closing to a life well-lived. Renee smiled at the notion of finality but says it’s not really a last hurrah. With a life as full and far-reaching as Don’s, Renee says he will live on in the legacy he left behind. (DK)