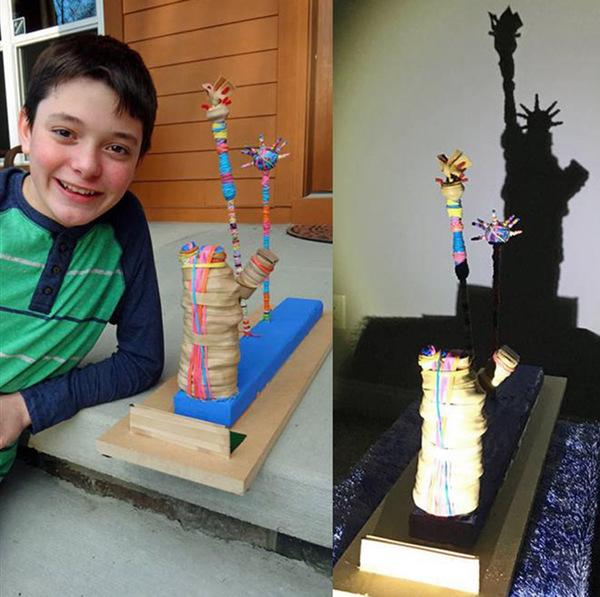 It was no stretch that a local middle school student returning to the national finals in a rubber band competition might win it all this year—and he did.

Seventh grader Parker Frye of South Lyon Millennium Middle School took 1st place at the University of Akron Global Polymer Academy’s annual contest for young inventors last week. Frye also made the national finals in 2015.The contest encourages 5th-8th graders to demonstrate their creativity by crafting inventions that include the use of rubber bands. The 13-year-old Frye’s creation was a sculpture called Liberty: The Sum of Our Parts. Frye used several different colors of rubber bands that represent the different races, cultures, and groups of people that make up America. With them he built 3 separate, disjointed pieces that on the outside don’t look like much. But shine a light on the sculpture from behind and it presents an amazingly lifelike shadow representation of the Statue of Liberty onto the wall.

Frye wrote in his essay for the contest that it takes all kinds of people to complete America, and that we are a sum of it its parts. He wrote that while he used just about every color rubber band he could find, that when the lights go out and the shadow appears, color no longer matters. Photo: rubberbandcontest.org (MK)