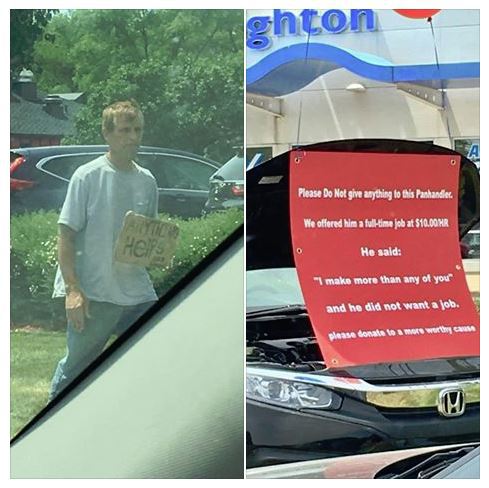 A Brighton car dealership took panhandling problems into their own hands Tuesday.

Brighton Honda placed a sign out front to inform passersby that a man who often begs for money by the dealership is really a scammer. The dealership is on Grand River near I-96 and the Hilton Road intersection. The sign stated man was offered a full time job at $10/hour and he responded that he made more money than anybody there and did not want the job. The sign further instructs individuals to donate to a more worthy cause.

Photos of the sign and the panhandler were shared on Facebook and went viral, generating a lot of support for how the dealership handled the situation.

A number of Livingston County residents commented that they’ve seen the man and two others park their car down the road then walk to over to the exit ramp. Others said the men are rude and inconsiderate, “yelling at people for not giving them anything” and declining food. They reportedly frequent the intersection, as well as Meijer and other areas throughout the city. State Police at the Brighton Post tell WHMI that they arrested a father and son in that area for disorderly conduct and vagrancy after receiving several calls about one of the men wandering into traffic. The pair were lodged in the Livingston County Jail.

Police previously told WHMI panhandlers find locales like Brighton lucrative because the area is relatively affluent and people tend to be compassionate for those they believe are in difficult financial straits. (JM/JK)