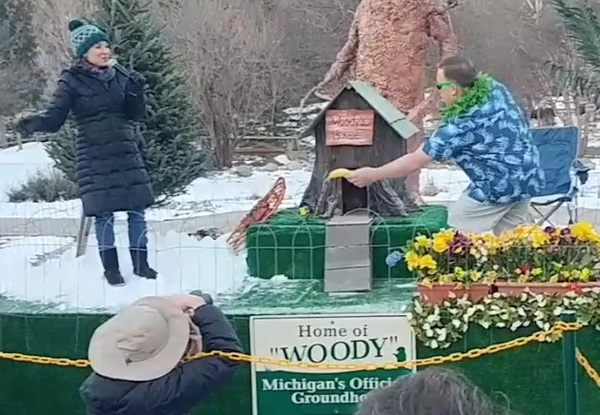 It looks like six more weeks of winter according to Woody the Woodchuck, billed as Michigan's official groundhog.

If she emerged from her house at the Howell Conference and Nature Center this morning and stayed out for 30 seconds or longer she'd be indicating an early spring; if she didn’t come out or ran back into her house before the 30 seconds are up, she would be forecasting six more weeks of winter. Unfortunately for those wishing to see less winter, Woody refused to budge from her house this morning at the nature center in Marion Township (pictured). Dozens of people turned out during chilly morning temperatures to watch the not-so-scientific forecast.

The prediction of six more weeks of winter matched that from handlers of Pennsylvania's most famous groundhog, Punxsutawney Phil. However, Woody’s is much better, having correctly forecast the length of winter almost 80% correctly in the last 19 years. Phil’s record is generally in the 40% range. (JK)