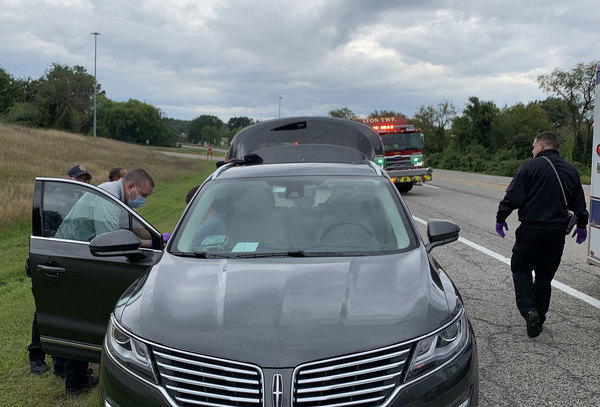 
Labor Day now holds special meaning for a local family and some first responders who all helped welcome an eager baby boy into the world over the holiday weekend.

Lyon Township firefighters were called out around 1:50pm Sunday afternoon to the westbound I-96 off ramp at Kent Lake Road, basically the service drive entering Kensington Metropark. Firefighter and EMT Alan Hamilton says the couple was traveling from their Brighton residence to Providence Hospital in Novi but didn’t make it and had to pull off the road. Hamilton said the woman knew she was going to deliver the baby so her significant other pulled over and called 911. Hamilton says the call was dispatched as an active labor in progress and they were able to arrive quickly as the Lyon Township Fire Station # 1 on Grand River is less than one mile away.

Hamilton told WHMI the mother had already delivered the baby when he and partner John Ruszala arrived on scene. He said the mother was holding the child in her arms and in good spirits and they performed post-birth care. That involved treating mom and baby, wrapping the baby in a thermal blanket, suctioning out the child’s nose and airway and cutting the umbilical cord. Hamilton said it’s definitely not something you see every day and there have since been a lot of puns and cheesy jokes about the meaning of Labor Day. He told WHMI both mother and baby were healthy and Nolan Kent Rodgers was named after the road he was born on. He weighed 6 pounds, 9 ounces and was 19 inches long.

Hamilton said it was a wild experience and somewhat similar to what he recently went through as his wife gave birth in January. Hamilton credited the whole team of firefighters who responded on scene as well as Huron Valley Ambulance. He commented that first responders see a lot of life and death in the profession. During a crazy year with many negatives, Hamilton said when you see a new life enter the world on high note, it’s nice to see the positive and reaffirms why he does what he does.