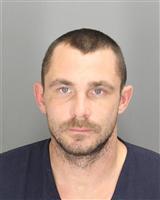 
A bench warrant has been issued for a Milford man after he failed to appear for his sentencing on charges arising out of a truck theft and police chase.

33-year-old Jesse Ray Linn was arrested December 4th after Milford Police say he stole a 2019 Chevy Silverado from a gas station in Wixom. After the vehicle was spotted by an officer near East Buno and Childs Lake roads, the truck began to accelerate before turning into a driveway on Childs Lake Road. The driver, later identified as Linn, exited the truck and ran north. Due to fresh snowfall, officers were able to follow tracks that led to a nearby swampy area and then to a business on King Ranch Drive. An officer walking along a fence line spotted Linn hiding in some weeds and ordered him at gunpoint to stand up. He was then arrested and turned over to Wixom Police.

Linn pleaded no contest in January to two counts of unlawful driving away of an automobile, one for the December 4th incident and another for a separate incident November 9th. He was released from the Oakland County Jail after posting a $10,000 bond pending sentencing on Tuesday in Oakland County Circuit Court. But records indicate that he failed to show up for his sentencing. His bond was then forfeited and a bench warrant issued for his arrest.