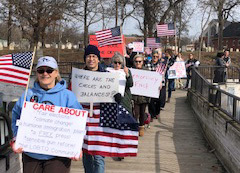 About two dozen protestors took part in a public display Sunday in Brighton.

Indivisible Livingston County hosted a March to Protect our Democracy at the Mill Pond in downtown Brighton. Organizer Brenda Lindsay said the march was, “an effort to raise awareness on the disturbing trend in which elected officials are abusing their power.”

When asked if there was a particular official or abuse of power they were protesting, Lindsay said the group, “chose to not make it anti-Trump and carried American flags and the community seemed more curious than annoyed.”