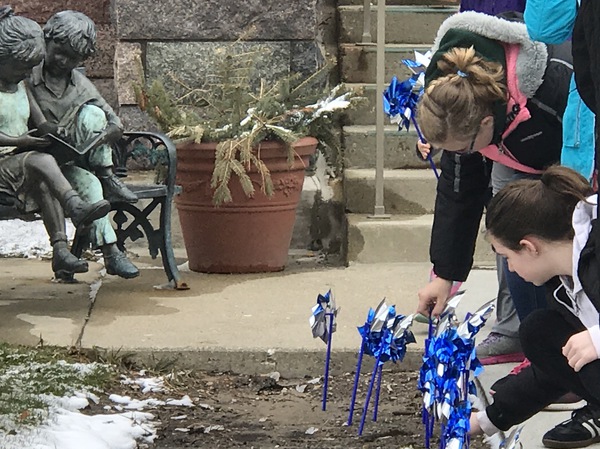 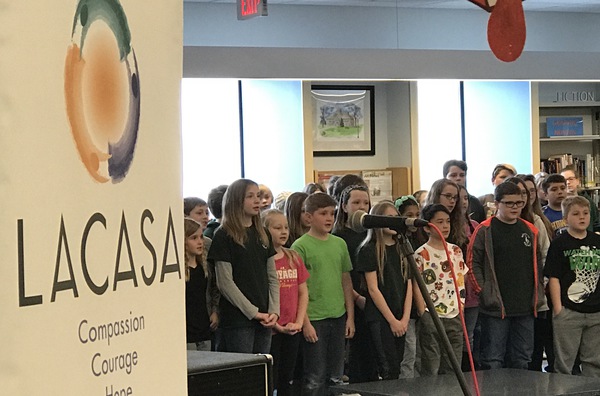 Musical performances were provided by the Voices of Voyager Choir from Voyager Elementary School in Howell during the lunchtime event, which had to be held inside the Howell Carnegie District Library on account of the weather. The event is held annually by LACASA Center’s Child Abuse Prevention or CAP Council.

Various speakers offered sobering statistics during the event but also hope. Local Council Coordinator of the Children’s Trust Fund, Emily Schuster-Wachsberger noted over 37,970 children were abused or neglected in the state last year, including 429 in Livingston County.

LACASA President & CEO Bobette Schrandt says child abuse prevention is an acknowledged community responsibility on behalf of children, and those gathered at the event helped to demonstrate that. Schrandt says raising awareness about child abuse can save someone’s life so the more people that know about abuse and the signs, then the less likely child abuse will continue.

CAP Council Coordinator Holly Naylor it was noted that prevention takes different forms from supporting a family that is struggling to direct intervention in a case of abuse or simply sitting and listening to a child that might be alone in a cafeteria. Naylor stressed those are all real actions that have impact on real people, which is what prevention looks like. She says the small actions individuals take almost every day don’t always get highlighted and they want to celebrate those.

Children and community members and others in attendance helped conclude the event by planting a pinwheel garden in front of the library and Howell Mayor Nick Proctor declared Wednesday “Plant a Pinwheel Day”. The pinwheel is used because it’s described as a happy, carefree symbol to remind that all children deserve a great childhood.

Other opportunities planned during the month for the public to become directly involved in protecting children can be viewed on LACASA’s website. The link is provided. (JM)