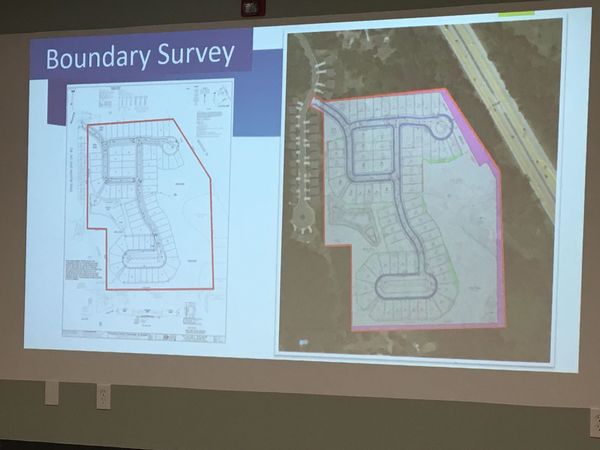 Project leaders for a proposed condominium development in the City of Brighton will have more time to complete their final plans, after revelations about discrepancies between the actual site and preliminary drawings came to light.

Final Planned Unit Development (PUD) drawings are currently underway for the Bluffs at Spring Hill project, located off Flint Road next to I-96; however, the development’s team sought a 150-day extension to complete the preliminary PUD. The team and request on Monday came before the City’s Planning Commission, who voted unanimously to grant developers a 120-day extension.

The need for the extension came after project leaders realized there were discrepancies between what was depicted on the PUD and the property’s actual layout. Mike Noles with engineering group Diffin-Umlor and Associates says revisions need to be made to the PUD’s property boundary line as a surveyor found the actual boundary was larger than what was shown on the preliminary PUD. The project’s team also wanted to revise internal setbacks that were shown in the preliminary plan in order to maintain a more consistent look throughout the development.

Noles assured the Planning Commission that even with the aforementioned changes, the development’s density still remains below 2.5 units per acre, a minimum of 30-foot space buffers have been maintained around the perimeter, any disturbed buffer will be replanted, and open space remains significantly above ordinance requirements. He also noted that the lot sizes will not vary in a significant way from the preliminary PUD approval, and the driveways are still able to accommodate visitor parking for each unit.

Noles summarized their case to say that ultimately, the homes haven’t gotten any closer to the neighbors, the buffers are still there, and the unit counts are still the same. But, he says gathering data that shows where the actual boundaries are and what the actual topography is does require some additional work on the layout, grading and utility plans, and that the project team is making those changes before the final PUD drawings are completed.