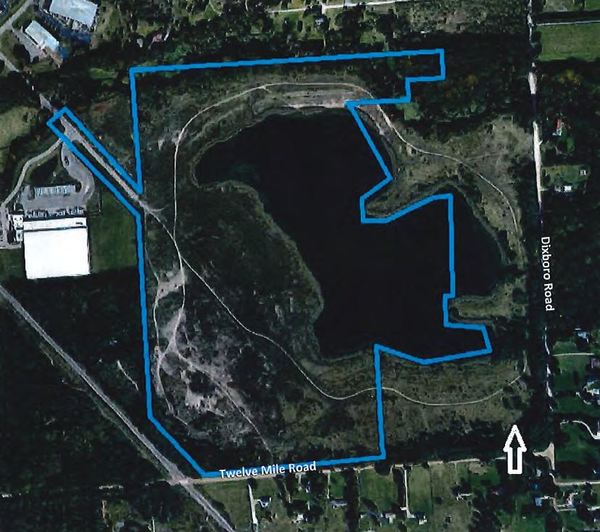 The township board met virtually Wednesday night and unanimously granted preliminary approval for the Dove Lake PUD or planned unit development that will feature 37 new single-family units on a vacant parcel between 12 Mile Road and Dixboro Roads that’s currently zoned rural estates. It will feature a 47.5-acre lake and a private road to the back of the site that connects through 12 Mile Road and Kensington Road. The applicants were before the Planning Commission for three meetings and made adjustments based on recommendations.

Project Engineer Michelle Spencer commented she believes it’s a great use of the property and they haven’t had any negative response through public hearings. She said the goal of the project is to give every person purchasing a home a lake lot and limit the amount of construction area to around the lake, leaving over 70% of the property undisturbed.

Most of the site will remain as woodlands and there were also said to be a lot of wetlands. It was noted they will not be touching any of the floodplain areas or working within any wetlands of the lake. A .22-acre pocketed wetland right in front of the property will be protected and lots will be served by private wells. Each lot will be over a quarter of an acre lake lot, which was said to be a fairly good size when compared to typical smaller lake lots. Spencer said a PUD was said to be pursued as smaller lots are being requested to provide more lake lots but it was noted undisturbed open space will be master deeded for perpetuity. It was stated that waterskiing and pontoon boats would be permitted on the lake but there would likely be established “no wake” times similar to regulations on Hidden Lake.


Clerk Mike Sedlak serves as the board representative to the Commission and said everyone was quite pleased and they reviewed the property quite extensively. He said the applicants explored every avenue and the statements made about it being a nice development with 70% of the land being unused were indeed true. Sedlak said it was much preferred to what was being initially proposed for the property back around 2005 that consisted of a commercial development and around 300 homes. He commented that this project is a significantly less impactful development of the property and the applicants took in mind all of the undisturbed land there, which will remain in perpetuity. He said they were really pleased with what it preserves, noting it gives people access to the lake and the lake lots are appropriate but more than that, it preserves a lot of the rural nature of the township.

Sedlak questioned if any trails would be incorporated and the applicants stated they were open to doing some woodchipped paths or trails through the wooded area.

Supervisor Mark St. Charles commented that it was refreshing to have such a complete development package come before the board that follows all design standards. He said it was a nice clean process and review, the applicants did a great job, and it should serve as an example for others.

Trustee Tracy Edry said it was the first time she’s looked at such a complete package in her 14 years on the board.

The project now moves back to the Planning Commission for site plan review.