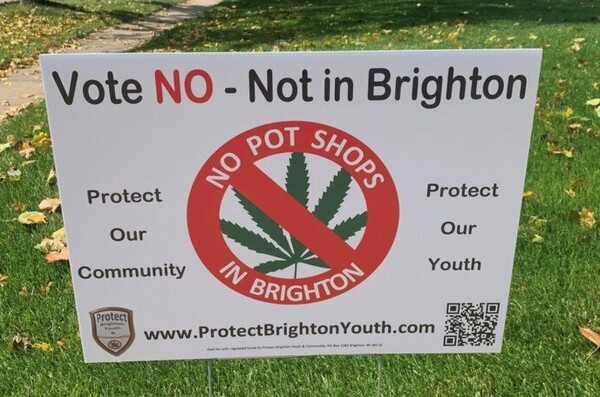 
In the City of Brighton, voters have rejected a proposal that would have allowed marijuana facilities in the municipality.

The City is among the local communities that “opted out” of allowing marijuana facilities.

The ballot proposal was put forward by the “Say Yes to Brighton” committee, which is headed up by outside marijuana industry professionals and attorneys.

Brighton Mayor Kris Tobbe told WHMI this was a proposal brought to the City by out-of-town attorneys and groups that were part of the marijuana lobby that have done this to a lot of other communities around the state and they went after Brighton and paid outside petition circulators for signatures. He says they thought that they knew the Brighton community and proposed the ordinance but voters overwhelmingly rejected it – which he added says a lot about what people in the community think that Brighton should be.

When asked about potential legal ramifications against the City; Tobbe responded that in the modern era, there’s always the chance for legal action. He said it was rejected by a pretty significant margin and shows voters really don’t want marijuana shops in Brighton. Tobbe noted the proposal that was submitted didn’t make any sense and it’s been rejected, adding they’re thankful to voters and appreciate them for what they’ve done for their community by stepping up and voting “no” on this.

Tobbe further thanked the city manager and various staff, who he said really helped Council understand what the proposal was all about and they really worked hard to “separate the wheat from the chaff”.

There are two separate public hearings set on the proposed ordinances that appear on the agenda for Thursday evening’s Council meeting that starts at 6pm in chambers at City Hall. Both items read to conduct a public hearing and consider adoption of the ordinances.

As for any future discussion by Council, Tobbe said it’s hard to say at this point in time. With the flurry of activity that has happened between now and August with the proposal, Tobbe said he thinks Council will really get back to focusing on the business they’re good at, which is making Brighton the best it can possibly be.

Ken Schmenk represents Protect Brighton Youth & Community - a grassroots, locally-based group that was formed to defend the City from the outside marijuana business interests pushing the proposal. He provided the following comment after the election:

“The fact is Brighton residents did not want marijuana sold in the city. It was a large margin win for the City of Brighton. They realized it was recreational marijuana not medical marijuana on the ballot. They were not fooled by the out of town Say Yes to Brighton group. They know they can order their marijuana and get it delivered within an hour from Whitmore Lake and Pinckney. The grass roots organization Protect Brighton Youth and Community did an amazing job educating the citizens of Brighton. The people of Brighton won and saved our community millions of dollars”.