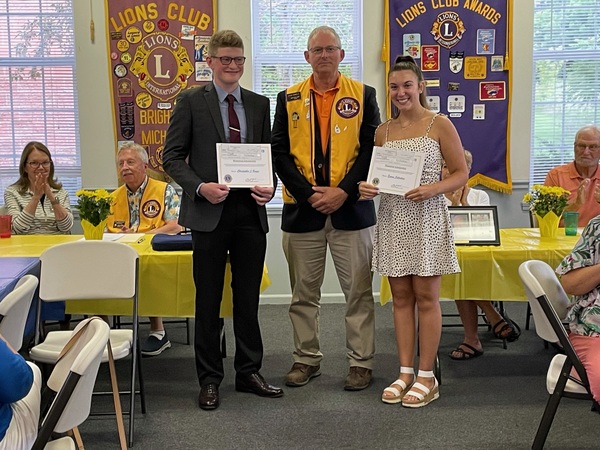 
Three June graduates of Brighton High School have each won $1,000 scholarships toward the college of their choice. The scholarships were presented to the students at a special ceremony held last week at the Brighton Lions Den on West Main St. in downtown Brighton.

The is the 9th year of the Joseph Piersante Memorial Scholarship, which is sponsored by the Brighton Lions Club. Piersante's daughter, Jana Cordon, attended along with her husband, Terry. Cordon has attended each of the scholarship dinners and gave words of encouragement to the winners.

This year's scholarship recipients are Chris Boggs, Emma Sebastian, and Chris Wozniak. Boggs will attend Central Michigan University in the fall, majoring in music education; Sebastian will pursue a career as a medical doctor and has enrolled at the University of Alabama; and Wozniak will pursue a degree in architecture at Lawrence Tech University. The criteria for the award center on community service and extracurricular activities.

The late Joseph Piersante was a committed Lions Club member for over 50 years. Vice President Don Nelson says, “(Piersante) was the original volunteer who was always the first to raise his hand when help was needed.” He was also a veteran, having served in the Navy during World War II.

The Lions Club International was established in 1917 in Chicago, IL, and now has 1.4 million members in over 200 countries. Perhaps known best for its programs for the blind and visually impaired, the Lions Club also sponsors initiatives for hearing and speech conservation, diabetes awareness, youth outreach, international relations, and environmental issues.

The Brighton Lions Club has been in existence for 62 years, having been formed in 1959. It meets twice a month on the second and fourth Wednesday. The first meeting is at 6:30 pm at the clubhouse, and the second meeting is a breakfast session at 8:15 am at Americus Grill, 9836 E. Grand River in Brighton. Anyone interested in becoming a member may contact the club at its website (brightonlions@juno.com) or call President Ken Hartford at 810-522-5243.