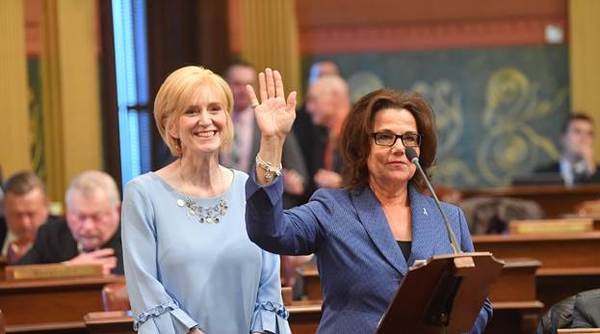 A local lawmaker is working to raise awareness about stomach cancer.

Republican State Representative Ann Bollin of Brighton Township introduced a resolution to declare November Stomach Cancer Awareness Month in the state of Michigan. Bollin addressed colleagues on the House floor this week and explained that stomach cancer is one of the most difficult cancers to detect in the early stages, leading to higher mortality rates. An estimated 27,510 cases were diagnosed in the U.S. this year and more than 11,000 people lost their lives to the disease. Bollin says they can significantly improve timely detection of stomach cancer if they educate about the symptoms and raise awareness in others. Additionally, she says they must pursue greater research into early screening and diagnosis for stomach cancer.

The resolution was said to be adopted with overwhelming bi-partisan support. Photo: Bollin is joined by Rep. Andrea Schroeder of Clarkston who was diagnosed with stomach cancer last year. (JM)